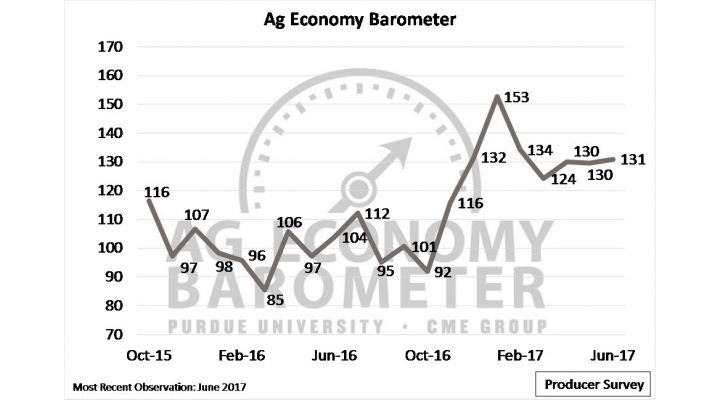 WEST LAFAYETTE, Ind. and CHICAGO — U.S. agricultural producers indicated their farm operations’ financial positions are stronger than at this time in 2016, but expressed concerns that they might not meet their 2017 financial targets, according to a monthly producer survey conducted as part of the Purdue University/CME Group Ag Economy Barometer.

The barometer, which is based on a survey of 400 U.S. agricultural producers, read 131 for the month of June – virtually unchanged from the April and May readings of 130.

“Although the Ag Economy Barometer has not changed appreciably the last couple of months, it’s important to note that it remains well above levels recorded prior to November 2016,” said Jim Mintert, the barometer’s principal investigator and director of Purdue University’s Center for Commercial Agriculture.

In June 2017, 13 percent of survey respondents indicated that their operations were financially better off than a year before – the highest reading since Purdue researchers first started surveying producers in October 2015.

Only 3 percent of producers expressed that same positive sentiment a year earlier. However, farmers’ positive sentiment regarding their operations’ financial conditions improved steadily during the last half of 2016, before weakening somewhat this past winter. In the last three months, producers became more optimistic about their farms’ financial positions, with 13 percent of surveyed producers indicating in June that their farms were financially better off than a year earlier.

“Several factors likely contributed to the long-term shift in producers’ attitudes about their operations’ financial conditions, Mintert said. “Revenues on many farms increased as a result of record – or near record – crop yields in 2016. Also, corn and soybean futures prices strengthened from late summer through early winter while production costs, especially fertilizer, moderated when compared to last year. Farmland rental rates also continue to soften as part of the farm economy’s long-term adjustment to tight crop operating margins.

While the barometer survey indicated the current financial situation for many farm operations had stabilized, 28 percent of producers said they expect their farms’ 2017 financial performance to be worse than they had projected earlier in the year. That concern could be connected to adverse planting and growing conditions in the Eastern Corn Belt this spring, as well as recent declines in corn and soybean prices.

The survey also revealed an uptick in producers (52 percent) expressing concerns that extreme weather events could have widespread adverse impacts on crop yields over the next 12 months.

“Compared to June 2016, producers expressed more concern about the possible impact of extreme weather on crop yields,” Mintert said. “One-third of producers in our survey said they had changed their marketing plans in response to weather concerns, up from just 22 percent in March of this year when we last posed the same question.”