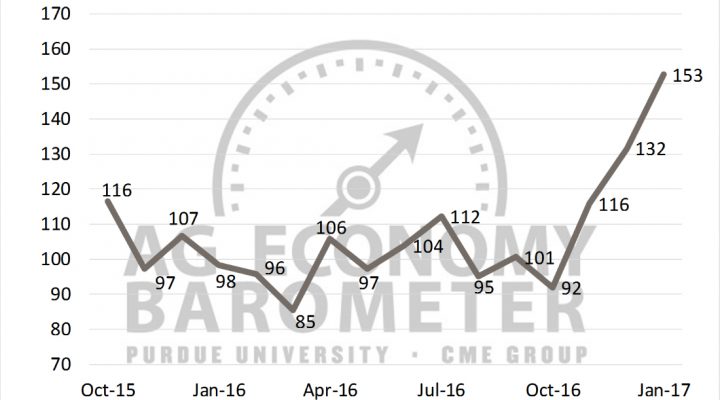 The January reading of 153 marked a substantial increase over December’s record-breaking 132. Not only is 153 the highest reading in barometer history, but the 21-point jump also represents the largest month-over-month sentiment change.

January is the third straight month the barometer increased after sentiment fell to 92 in October 2016. The barometer is based on a monthly survey of 400 U.S. agricultural producers.

“The biggest contributor to the large uptick in optimism since October has been producers’ increasingly favorable expectations about the future,” said James Mintert, the barometer’s principal investigator and director of Purdue’s Center for Commercial Agriculture. “This was again the case in January, but it’s worth noting that producer optimism was also supported by a perceived improvement in current conditions.”

Part of that perception was driven by improvements in prices for key commodities, including soybeans, cattle and hogs.

Another possible source of producer optimism is the potential for a new regulatory environment with the new U.S. presidential administration, said David Widmar, senior research associate and leader of research activities for the barometer.

“Given that regulations affecting agriculture have been increasing over time, it’s noteworthy that 41 percent of the respondents expect a less restrictive regulatory environment in five years than they face today,” Widmar said.

One difference between producer and thought-leader sentiment was in expectations for new-crop corn and soybean futures prices, Widmar said.

Read the full January Ag Economy Barometer report at http://purdue.edu/agbarometer. The site offers additional resources, such as past reports, charts and survey methodology, and a form to sign up for monthly barometer email updates and quarterly webinars.

On Thursday, Mintert, Widmar and Purdue Professor of Agricultural Economics Michael Langemeier will present a barometer update webinar at 1:30 p.m. EST/12:30 p.m. CST. They will discuss current factors impacting the industry and drivers of agricultural producer sentiment. The webinar is free. Register here.

The Ag Economy Barometer, Index of Current Conditions and Index of Future Expectations also are available on the Bloomberg Terminal under the following ticker symbols: AGECBARO, AGECCURC and AGECFTEX.