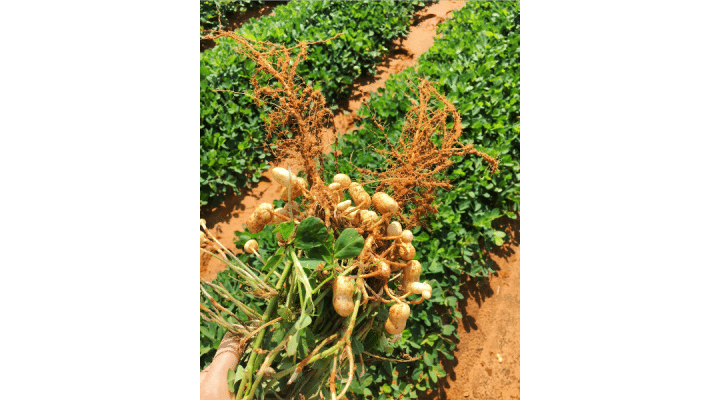 If weather cooperates over the next 60 days, Texas peanut producers could be looking at an above-average year due to very good growing conditions and prices. (Texas A&M AgriLife photo)

COLLEGE STATION, Texas — Texas peanut growers have favorable market and growing conditions, and with a little down-the-stretch cooperation from Mother Nature, 2021 could be a bumper year, according to Texas A&M AgriLife Extension Service experts.

Rains did not stop through July, Kimura said.

“We appreciate the rain, but it did not stop, and we were behind at least two weeks,” she said. “Acres in Central Texas missed their planting window because they could not access fields. They were waiting and waiting but had to give up and look for other options.”

Producers in Texas’ top peanut region – West Texas – were able to plant, as well as in South Texas and the Rolling Plains, but overall acreage was expected to be down slightly, Kimura said. Planted peanut acreage in Texas was estimated at 178,000 acres compared to around 190,000 in 2020.

Despite fewer acres and trouble getting the crop planted, Kimura said Texas peanut producers are hopeful due to excellent moisture and overall good growing conditions. Last year, widespread drought and a hard freeze in late October contributed to a below-average production season.

Rain, cooler temperatures and cloudy days have slowed the crop’s progress after delayed plantings, but the moisture has allowed plants to produce heavy pod sets, and recent weather has provided sun and heat plants need to mature.

The outlook remains cautiously optimistic, however, Kimura said. Farmers must avoid problems like disease and pests, but most are proactive when it comes to fungus and insects that could reduce crop yield or quality.

Kimura believes proactive management for diseases has kept them in check so far and that the main pest problem this year has been weeds because of wet conditions and late canopy development.

But Mother Nature is beyond the producers’ control. An early frost poses the biggest threat to the 2021 harvest, which typically begins the first week in October, Kimura said.

The delays and slow progress through July could push harvest for many fields later into October than preferred, Kimura said. Last year, the first frost arrived in the Rolling Plains during the second week in October.

“We’ve talked to producers in West Texas and the Rolling Plains, and those are the two regions we worry about an early freeze,” she said. “We need a warmer September to push the plants along and help us catch up. That would help, but we also are hopeful the first frost is later than last year.”

An early frost would translate into grade reductions, Kimura said. Grade reductions would be disappointing for producers who are looking at a bumper crop and good market prices.

Francisco Abello, AgriLife Extension economist, Vernon, said a majority of Texas peanut acres are grown according to contracts agreed upon before planting. The contracts provide shellers an availability estimate and helps producers lock in buyers and prices they can make management decisions around.

The U.S. Department of Agriculture’s five-year average peanut price is $417 per ton depending on variety, Abello said, while average prices for the last 10 years average close to $466 per ton. USDA pricings are still far from those prices in the past.

“Domestic demand, consumption and increased exports led to a price jump,” he said. “With producers in other areas looking at other commodities like cotton and corn as a profitable rotation option, we don’t expect there to be any significant gains in peanut stocks, but we do expect demand to remain high.”

Abello said the average contract price bodes well for producers who have endured breakeven prices for years. Increased demand for peanut butter has been a major factor in declining stocks and that demand is likely to remain steady.

“This is a much better position for Texas peanut growers,” he said. “If they locked in around the average price and fields deliver on yield and quality expectations, it could be a good season for them.”

Join us for the next Produce Safety Alliance Grower Training Course!
May 22, 2022