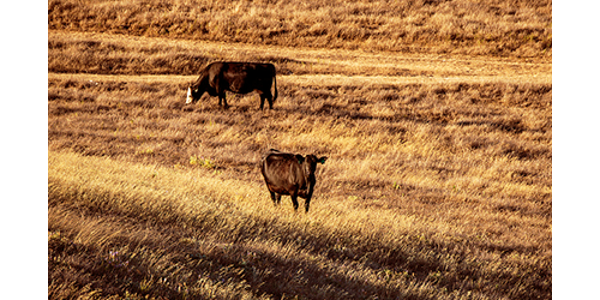 Sporadic rainfall early in 2017 focused attention on insurance for pasture and forages for livestock feed. (Courtesy of SDSU Extension)

BROOKINGS, S.D. — Sporadic rainfall early in 2017 focused attention on insurance for pasture and forages for livestock feed. The primary product, Pasture, Rangeland, and Forage (PRF) insurance, is offered nationwide. In South Dakota the coverage is based on a Rainfall Index (PRF-RI) with indemnity payments tied to a lack of rainfall in a given area. With the November 15 deadline to purchase or change coverage for 2018 approaching, producers may want to consider several aspects of the insurance.

The premiums to purchase PRF are subsidized similar to other crops, but participation or use remains low. In 2017 over 75 million acres were insured with PRF nationwide. In South Dakota, despite a record 3.1 million acres insured, the percent of permanent pasture and rangeland covered is still less than 14% of the 22.5 million acres eligible based on the 2012 Census of Agriculture.

Figure 1. Share of pasture acres insured with PRF in 2017.

When aggregated, the benefits to the insured look quite clear. For example, as of early October 2017, producers paid $10.8 million in premiums and received $17.1 million in indemnity payments. However, that masks the performance for individual locations. Some producers have been surprised by large payments, while others have been disappointed by small payments.

The insurance relies on a relationship between rainfall timing and forage production amounts. Producers insure against low precipitation during specific intervals for localized grids that ideally match their haying or grazing needs. Rainfall is grid-level and not farm- or ranch-level when measured with data available back to 1948. There is usually not a grazing history for individual farms, but county hay yields can be used as a proxy to measure the desired correlation.

Producers have to allocate or weight acres across intervals. For specific intervals in a given grid, the correlation may be very low between rainfall and yields. Other grids may have a stronger correlation, suggesting better performance of the insurance. There is not a lot of yield data to make robust judgements about performance, but back-testing suggests some weighting methods may improve the effectiveness of the coverage. Higher weights may be used for intervals that are correlated with low yields. Using weights in multiple intervals often, though not always, improves the correlation compared to using single intervals. Using a high weight for a given interval may forgo subtle relationships among intervals.

Indemnity payments are calculated based on a base price level that varies by location and practice (Figure 2). Starting in 2018 the South Dakota non-irrigated haying base rate varies by district, ranging from $125 to $271 per acre. The grazing base rates can change from year to year and for 2018 range from $16.20 to $35.00 per acre. Producers have to pick a productivity level from 60% to 150% of the county base. Producers may consider a higher level if their replacement feed cost is high or a lower level if they have low yields in district. Producers may also elect a low productivity level if their yields have been poorly correlated with rainfall in their grid, thus reducing premium costs for less-effective coverage.

Figure 2. Base rates by reporting district for grazing and haying in 2018.