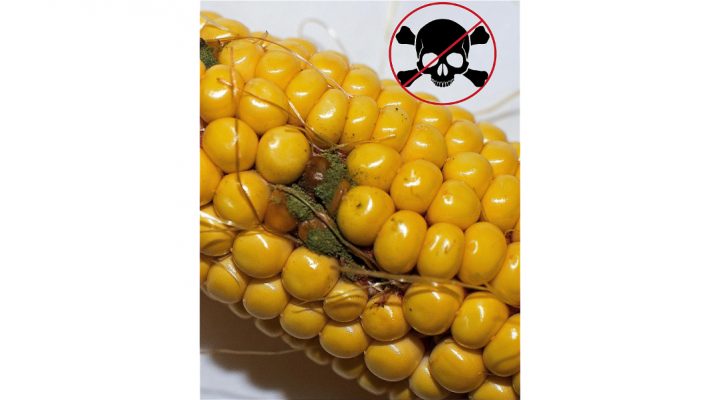 Despite being infected with Aspergillus fungus, this transgenic corn cob is not contaminated with aflatoxin, thanks to its defense line of RNA molecules that shut down the toxin production in the fungus. (Monica Schmidt/UA)

TUCSON, Ariz. — Researchers at the University of Arizona have found a promising way to prevent the loss of millions of tons of crops to a fungus each year, offering the potential to dramatically improve food security, especially in developing countries. The team’s approach uses transgenic corn plants that produce small RNA molecules that prevent fungi from producing aflatoxin, highly toxic substances that can render an entire harvest unsafe for human consumption even in small amounts.

Although extensive field testing will have to precede widespread application of the new technique in agricultural settings around the world, the results of the study, published in Science Advances, showed that transgenic corn plants infected with the fungus suppressed toxin levels below detectable limits.

Crops all over the world are susceptive to infection by fungi of various Aspergillus species, a fungus that produces secondary metabolites known as aflatoxins. These compounds have been implicated in stunting children’s growth, increasing the risk for liver cancer, and making people more susceptible to diseases such as HIV and malaria.

Unlike in the U.S., where crops intended for human consumption are tested for aflatoxin and incinerated once levels approach 20 parts per billion (equivalent to one drop of water in a 22,000-gallon pool), no testing is available in many developing parts of the world, especially in Africa, where millions of people depend on consuming what they harvest. There, toxin levels up to 100,000 parts per billion have been measured, says study leader Monica Schmidt, an assistant professor in the UA’s School of Plant Sciences and a member of the UA’s BIO5 Institute.

“Aflatoxin is one of the most potent toxins on the planet,” Schmidt said. “Usually it won’t kill a person outright, but it can make you very sick.”

Funded by the Bill and Melinda Gates Foundation, Schmidt and her team set out to study whether a naturally occurring biological mechanism called RNA interference could be used as a weapon against the Aspergillus toxin. That approach, called Host-Induced Gene Silencing, or HIGS, builds on previous work by other researchers who discovered that during the infectious process, the host plant and the fungus exchange small nucleic acid molecules.

“When I read about this in the literature, I thought, ‘Why can’t we make a Trojan horse to shut off that toxin?'” said Schmidt, who has been working on this project for years. “We introduced an engineered DNA construct into the corn that passes the RNA into the fungus when it infects the corn plant.”

The modified corn plants carry a genetic blueprint for small RNA molecules, each only about 20 base pairs long, only in the edible kernels, not the whole plant.

“The corn is constantly producing that RNA during the entire development of the kernel,” Schmidt explained. “When the kernels come in contact with the fungus, the RNA moves over into the fungus.”

Once inside the fungal cells, the hairpin-shaped RNA molecules pair up with corresponding target sequences of the fungus’ own RNA that code for an enzyme needed for toxin production, in a process called RNA interference. This causes the toxin production to shut down, but does not in any other way impact the fungus, which continues to grow and live on the corn, albeit harmlessly.

The HIGS approach has a distinctive advantage over existing efforts to keep aflatoxin out of the human food chain, because it prevents the fungus from making toxin in the first place while the crop is growing in the field, as opposed to protecting crops only after they have been harvested and stored. Such approaches include solar-powered fans that suck out air from storage facilities or sealing crops in huge storage bags creating airless conditions so fungus cannot grow.

Another strategy, pioneered by study co-author Peter Cotty, a research plant pathologist with the U.S. Department of Agriculture and the UA’s School of Plant Sciences, has explored spraying crop plants with strains of Aspergillus that do not produce aflatoxin, thereby preventing their pathogenic kin from establishing themselves on the plants.

HIGS holds great promise because it is highly specific and targeted in its effect, Schmidt explained, and could potentially be applied to other crops as well.

In their experiments, the team infected corn plants with Aspergillus and let them grow for one month. While untreated control plants were found to harbor toxin levels between 1,000 and 10,000 per billion, toxin levels were undetectable in the transgenic plants.

“The detection limit is not zero, but low enough for the corn to be safe to eat,” Schmidt said.

The team took the project a step further and investigated overall gene expression in kernels to see if the transgenic corn plants come with undesired side effects. This involved co-author Rod Wing’s laboratory, also of the UA’s School of Plant Sciences, to compare thousands of RNA transcripts between the nontransgenic control kernels and transgenic kernels. The team did not find a single significant difference in terms of differential gene expression between the transgenic and the non-transgenic kernels, according to Schmidt.

“This corn plant would be like any other,” she said. “The only trait that sets it apart is its ability to shut down the toxin production. It shouldn’t have any other effects, but obviously, a lot of downstream testing will be required before it could be grown in the fields.”

Schmidt and her team chose the open access journal Science Advances specifically because “we want anyone with an internet connection to be able to access our results, especially in Africa, where aflatoxin is such a big challenge to food security.”

–University of Arizona
via EurekAlert!