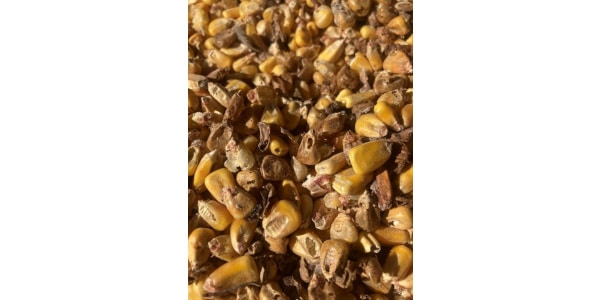 MINNEAPOLIS — Late summer and early fall is time to ensure infested and spoiled grain in bins from previous harvests won’t cause more problems for this year’s harvest. Over the summer, insect infestations may have grown in grain bins, especially in areas where spoiled grain accumulated even after being mostly emptied (Fig. 1). Keeping good sanitation practices prior to putting the next harvest into storage will help break pest cycles and reduce the likelihood of issues with spoilage or price docking at the elevator. Once grain is in the bin, options to manage existing insects are very limited, especially grain that is going to be stored through the following spring or summer.

Integrated pest management for insects in stored grains is closely tied to sanitation to also prevent grain from spoiling and overheating. Clean bins and equipment, maintain temperatures that are not ideal for insect development as long as possible, and consider residual insecticides when insects have continued to be an issue in previous years.

Common insect species can include: saw-toothed grain beetle, grain weevils, and India meal moth. Many of these species are generalists, so they can infest corn, soybeans, wheat, and other grains. Direct feeding damage can be a more obvious symptom of insect issues with hollowed out seed and exit holes from beetles or webbing from moth larvae that causes grain to clump (Fig. 2). Immature stages of many of these species live within the seed and will not always be readily visible. This also offers them some protection from transport, augering, or bin stirators.

Clean bins and other equipment

Reducing the amount of material insects can use as shelter or to reproduce is key for stored grain pest management as small amounts of infested or moldy material can infest clean incoming grain.

At least a few weeks before filling a bin, vacuum or sweep out old material. Accumulations of chaff, fines, and broken kernels are preferred habitat for stored grain insects. While a bin may appear clean, don’t forget about areas where these materials may accumulate out of sight, such as underneath slotted flooring.

Once a bin is cleaned out and checked for cracks or openings where insects might gain entrance, check any harvest or transport equipment where old grain may not have been cleaned out last year. An unused auger or corners of a grain truck that were not entirely cleaned out can harbor insects over the summer that will reinfest your harvest and rebuild pest populations.

During summer and fall insects will be near the surface of the grain mass, while in winter they will move to the center of the pile where infestation may not be noticeable until temperatures rise. Insect feeding can cause temperatures in a bin to rise to 110°F, which can cause issues both for spoilage and make the grain mass even more ideal for insect development.

When grain temperatures are below 50°F, insect development slows, and at 25°F, insect activity mostly stops. Some mortality can also occur at colder temperatures, though this is highly dependent on species, the actual temperature experienced in the grain, and the length of cold exposure. From both a grain quality and insect management approach, it is important to take advantage of cold Minnesota nights to run fans and move cold air across the entirety of the grain mass.

Insecticides will not be effective if grain still has to be dried. Running grain through augers and especially heat will degrade insecticides, so this option should be reserved for final storage rather than a drying bin. While fumigants are available for already filled and infested bins, these can be difficult to use to ensure coverage across the entire grain mass. Instead, prevention through sanitation and residual insecticides two to three weeks before putting new grain in a bin will typically be the easier and less expensive option.

Residual insecticides can be applied in a few different manners as a protective strategy. Surfaces of bins can be treated to target adult insects that do manage to enter through openings in the bin or remain wandering the bin after food sources have been removed. These treatments need to dry over at least 24 hours to be effective, and there should be at least a two week period after application until the bin is filled. Other strategies include treating the entire grain mass as it passes from the auger into the bin, or a top dressing treatment to protect against insects entering from the roof as long as the top layer is not disturbed. Always follow pesticide label requirements and guidance for specific uses and insect species.

Goat and sheep webinar feeding for the age and stage of production
October 26, 2021