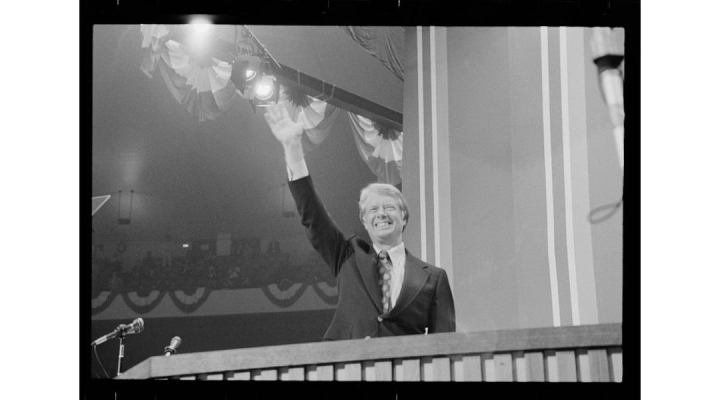 GREENWICH, N.Y. — The 95th FFA National Convention is happening next week from October 26th-29th. Thousands of FFA members from across the country will converge on Indianapolis to take part in this annual celebration of FFA. One of the unique aspects of this event is that the President of the United States is invited every year to speak at the event. However, only a few presidents have taken the opportunity to address students at the Convention. The speeches that each respective president made reflected the policy issues and agricultural challenges of their times, and exhorted the young people in attendance to develop into the leaders that FFA seeks to make.

The FFA (Future Farmers of America) began in 1925 as the Future Farmers of Virginia as the group was started by a group of Virginia agriculture teachers. Eventually the organization spread nationwide and the first National Convention was held in 1928 in Kansas City, Missouri. The Convention was held in Kansas City every year until 1998 when it moved to Louisville, Kentucky. In recent years the convention has shifted between being hosted in Louisville and Indianapolis, Indiana.1

The first president to speak at the national convention was Dwight D. Eisenhower at the 25th Convention in 1953. Eisenhower had experience as a farmer as his family farmed in Abilene, Kansas when he was a boy, and he remarked that he wished an organization like the FFA had been around when he was growing up. Eisenhower spoke about the challenges facing farmers at that time, mainly a drought that was affecting parts of the country and overproduction as many farmers were still producing at war-time levels which was affecting prices. He shared ways his administration was forming organizations and implementing policies, such as price supports, to meet these challenges.2

Eisenhower shared on the breadth of agriculture emphasizing its impact near and far saying, “The interests of you young men and women here cannot be limited, isolated, or described by any single term such as ‘agriculture.’ Your vision in the coming years must range beyond your immediate problems and your home communities. Your vision must encompass the entire globe.”3 He also spoke at length about the confidence he had in America’s young people saying, “I foresee no limits to your future. It is truly boundless. Anyone my age who deeply believes in America sincerely congratulates you as you start the exciting and challenging journey through life, even though he cannot see and experience what you are going to see and experience.”4

The next president to visit the convention was former President Harry S. Truman in 1957. Truman farmed with his family in Grandview, Missouri for ten years earlier in his life, so he understood the leadership qualities farming can form in a person. He emphasized this point by speaking about how most presidents up until that point had gotten their starts on farms or were farmers at some point in their lives.

He applauded the advancements of agriculture saying, “I am interested in the fact that production per acre has increased at a phenomenal extent. You have made two blades of grass grow where one used to grow.”5 Drawing on these examples of leadership and development he spurred those in attendance to continue the progress saying, “Now you young farm people have a chance that no other generation has ever had in the history of the world. I am urging you to inform yourselves so you can take advantage of that chance and keep this country the greatest Republic that the sun has ever shone on. It is up to you to do it. I hope you will.”6

In 1968 then candidate Richard Nixon made remarks at the convention calling agriculture America’s number one strength. He exhorted the FFAers in attendance reminding them that they possessed the power to lead American agriculture to even greater heights.7 A few weeks later Nixon would be elected president winning the 1968 election over Minnesota Senator Hubert Humphrey.

Nixon’s successor Gerald Ford attended the convention in 1974. His address was the first convention speech to be televised nationwide. Ford became president in August 1974 after Nixon resigned as a result of the Watergate scandal. The Watergate scandal rocked the nation leaving many feeling betrayed by and distrust toward the nation’s leadership. Ford used the opportunity to continue his message of healing in the wake of Watergate urging the youth in attendance to have confidence in themselves, their government, and their free, competitive society.8

Similar to more recent events, inflation was a major economic problem in 1974 and much of the 1970s. When addressing the convention, Ford enlisted the FFA to join in the administration’s WIN (Whip Inflation Now) campaign. WIN was a grassroots movement that sought to curb inflation through voluntary actions by citizens like personal savings and disciplined spending habits. Ford explained, “I need help from young Americans all over this great land. The creative energy and the enthusiasm of youth in my judgement is a sure guarantee of winning.”9 While WIN was unsuccessful in the long run, Ford at other times called on the FFA to help tackle the issue.

A few years later President Jimmy Carter attended the FFA Convention in 1978. Carter has the distinction of being the only president to have been an FFA member. Carter spoke about his childhood on a peanut farm in Plains, Georgia and his time as secretary of the Plains chapter of the FFA. “The first thing I joined in my life was the Baptist Church. The second thing I joined in my life was the FFA…,” he said mentioning the organization was only 9 years old when he joined.10 Understanding that leadership development is a main tenet of the FFA, Carter spoke mostly about different facets of leadership. He shared that fear of failure is major challenge to progress, the inability to make appease or please everyone, and the differences between leading in times of crisis versus times of calm citing examples from his time as president up to that point.

He also spoke about leadership requiring the help of others, but also times of standing alone. “Leaders in FFA at the national, State, or local level, Governors, Presidents, have a lot of advisers, very valuable. But the most difficult decisions of all, the toughest decisions almost invariably, I have found, must be made alone,” he said. In closing he encouraged the attendees to live up to the standards of FFA and make an impact in their various spheres saying, “…whether one is the secretary of a local FFA chapter, which I was, or the President of the greatest nation on Earth, it’s our responsibility together as partners, as common leaders, to bring out the best in the people who observe us and to make even greater the greatest nation on Earth.”11

1991 brought the next presidential visit to the FFA convention when George Bush attended. Bush mentioned that 77 senators wrote letters to him saying he should attend the event highlighting the clout of the FFA. Bush challenged the FFAers to excel in education as his administration was implementing the America 2000 to improve American education. He also challenged them to implement their leadership and agricultural skills in order to keep America competitive in the global marketplace. In his address he stated, “…your country is counting on you, and I’m counting on you, to find new uses for traditional and nontraditional crops, your field, things you know something about. We want you to outfox our competitors with your marketing skills. We expect you to draw on rural America’s tradition of conservation and lead all Americans to use our natural resources, our precious natural resources, wisely…”12

After Bush it would be 27 years before another sitting president attended the national convention when Donald Trump did in 2018. Trump spoke for over an hour to the crowd of FFAers where he talked about his administration’s ag policies. The speech at times meandered, as was sometimes the case when Trump spoke, as he got talking about the durability of palm trees at one point and joked that he was “having a bad hair day” at another. However, he eventually did praise the FFA and encourage those listening saying, “You are amazing people. Your time in the FFA, in the field, in the farm, in the land, and in the classroom has not only prepared you for a stellar, great career in something you love, it’s taught you essential truths about life and about the world in which we live. You know that success only comes through hard work and perseverance.”13

Apart from those who spoke in person, other leaders have made pre-recorded messages which aired at the convention. President Ronald Reagan did so in 1988, followed by First Lady Michelle Obama in 2015 and Vice President Mike Pence in 2017.

The FFA has always been and remains a non-political organization. The invite to attend the convention is extended to whoever is occupying the White House each year, regardless of political party. Organizers feel it is a once-in-a-lifetime opportunities for the students in attendance when the president attends so they continue the practice each year.