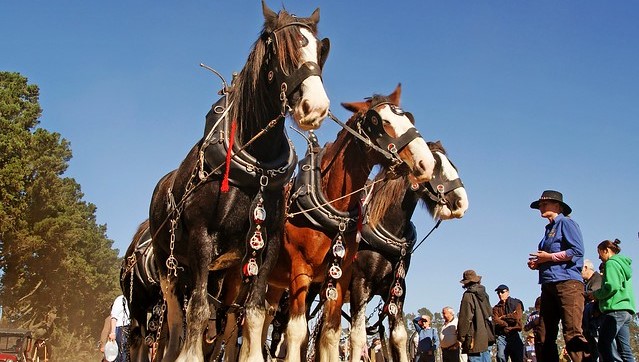 On one parcel of farmland, plowing, planting and harvesting is still done the old-fashioned way with teams of draft horses and mules. (Stock photo via Bernard Spragg. NZ, Public Domain)

COLFAX, Wash. (AP) — Harvest time in eastern Washington usually brings out tractors, trucks and other modern machinery as farmers bring in their crops.

But on one parcel of farmland, plowing, planting and harvesting is still done the old-fashioned way with teams of draft horses and mules.

On Labor Day, a combine header pushed by a team of six Percheron draft mules fed cut grain into vintage wagons, each pulled by a pair of horses, as several acres of barley were harvested near Colfax.

The grain had been planted in April, also using teams of horses and mules.

A stationary thresher, powered by a 100-year-old wood-fired steam engine, was then used to separate the grain from the chaff at a yield of more than two tons an acre.

Several hundred spectators watched the annual demonstration, which is open to the public.

Volunteers with the Palouse Empire Threshing Bee Association, a group dedicated to preserving the way land was farmed decades ago, took time away from their own harvest to bring in the barley.

“A lot of these old farmers that started this organization had actually done it this way,” said Stan Riebold, a long-time member of the group who drove the mule team cutting the grain.

“It’s a way to keep the past alive and show the younger generation the way it was done,” he said.

Riebold said the barley would likely be used in animal feed.

Despite the slow pace and difficulty of the work, he says he prefers horses to modern combines.

“I tell people I was born 30 years too late,” he said. “Today the pace is so fast that everyone thinks they need to be done in two weeks.”

Riebold also said the high cost of heavy machinery can give large farm operations an advantage over smaller ones. While farming large tracts of land with horse and mule teams isn’t practical in today’s world, members of his organization plan to continue preserving the old way of doing things.

“We’ll just keep plugging along, we’re not going to change anything,” he said.