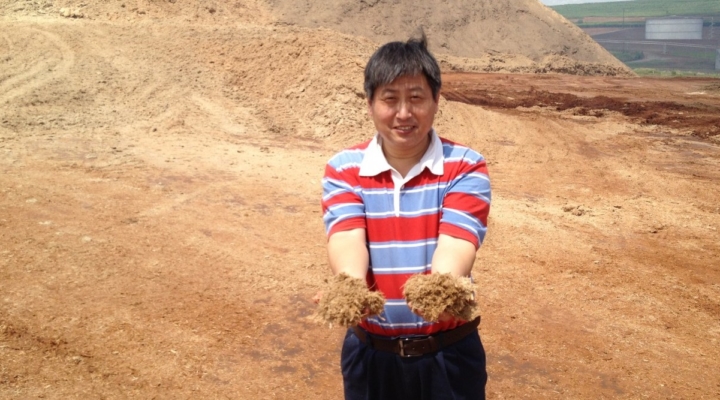 A new study, published in Bioresource Technology Reports, takes a look at the bioconversion efficiency of two products often used as biomass for energy production, miscanthus giganteus and sugarcane bagasse. The study's lead author Zewei Miao is pictured here in front of a mountain of sugarcane bagasse in Brazil. (Courtesy Photo)

URBANA, Ill. — Research on energy production from biomass usually focuses on the amount of energy generated. But it is also important to consider how much energy goes into the process,  a component that is often neglected, says Tony Grift, professor of Agricultural and Biological Engineering in the College of Agricultural, Consumer and Environmental Sciences and the Grainger College of Engineering at the University of Illinois.

Grift is co-author on a new study, published in Bioresource Technology Reports, that takes a look at the bioconversion efficiency of two products often used as biomass for energy production, miscanthus giganteus and sugarcane bagasse.

“Our goal was to determine how much energy it takes to prepare these materials. It’s a comprehensive look at various preprocessing methods and their relationship to conversion efficiency,” he explains.

The two materials were chosen because of their importance for energy production. Miscanthus is typically grown as an ornamental crop, but it has a high amount of biomass and grows easily with very little nitrogen use. Sugarcane bagasse is the byproduct left over after sugarcane is crushed to extract the juice for sugar.

The study was done in collaboration with chemists from University of California at Berkeley. Grift says the interdisciplinary approach makes the research unique, because it considers the whole energy balance. The U of I researchers, including Grift and postdoc research associate Zewei Miao (now at Bayer Company), studied the energy expenditure of harvesting and preprocessing materials. The Berkeley chemists focused on converting the biomass to glucose, which is used to make ethanol.

The researchers subjected the two materials to nine different preprocessing methods, either separately or as a blend. Preprocessing is done for various reasons, Grift explains. After the crop is harvested, it needs to be transported to a processing plant, and to make transportation efficient, the material first undergoes a process called comminution, in which is it chopped or cut into smaller pieces, and then it is compressed.

“Smaller particle sizes make compression easier,” he says. “It’s also better for energy production, because it provides a larger surface area for enzymes to attach to in the conversion process. But comminution takes a certain amount of energy, so there is a tradeoff.”

The preprocessing methods included chopped and cut stems, pelletization, comminution, and various levels of compression. Of the nine treatment groups, five included miscanthus, three included sugarcane bagasse, and one included a blend of the two products. The processed materials were all subjected to the same chemical processes to release the glucose.

The researchers also evaluated the effects of particle size, compression level, and blending on biomass conversion efficiency. The results showed that comminution had a positive effect on the efficiency of miscanthus but not sugarcane bagasse, while the opposite was the case for pelletization. The researchers also found that a 50/50 blend of the two materials had higher conversion efficiency than sugarcane bagasse, but there was no significant difference compared to miscanthus alone.

“The differences are not huge. But if you want to do something on a larger scale it’s actually quite important to figure these things out,” he explains.

Grift emphasizes that the results are preliminary and should be examined in further studies.

Continued research is needed to substantiate the findings and to broaden the knowledge base to other products and other preprocessing methods.

The article, “Measuring the influence of biomass preprocessing methods on the bioconversion efficiency of miscanthus giganteus and sugarcane bagasse,” is published in Bioresource Technology Reports. [https://doi.org/10.1016/j.biteb.2019.100301] Funding was provided by the Energy Biosciences Institute.

Authors include Zewei Miao, formerly a postdoc research associate at the U of I, now at Bayer Company, Stefan Bauer and Ana B. Ibáñez, University of California at Berkeley, and Tony Grift, Department of Agricultural and Biological Engineering and Grainger College of Engineering, U of I.

Ag and solar energy can be mutually beneficial
January 8, 2020