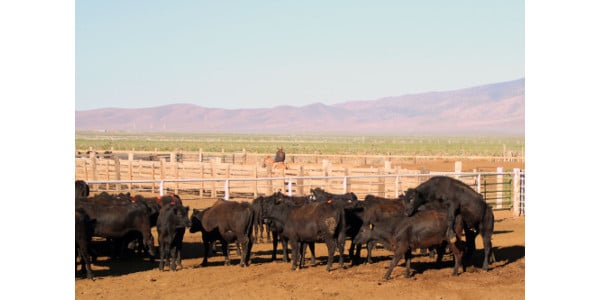 Many producers primarily use self-adhesive breeding indicator patches for heat detection. Breeding indicators can also be used to determine when heifers have become pubertal by observing estrous cyclicity. (Courtesy of Estrotect)

SPRING VALLEY, Wis. — The ability to get replacement heifers bred and calved out early are important indicators for how long heifers will stay in a cow herd. And, heifers need to be fully developed heading into their first breeding season to ensure they’ll have longevity and pay for themselves.

“When you think about all the costs of developing a replacement heifer, it’s critical they remain in the herd as long as possible,” says George Perry, beef reproductive management specialist for South Dakota State University Extension. “Data suggests it takes approximately five calves to pay for a replacement heifer’s development costs.”

So, how can you keep heifers in the herd and maximize profit? It starts by knowing when a heifer is ready to breed for the first time.

The long-stated gold standard is for heifers to reach 65% of mature weight by the time of breeding. But more recent research has revealed heifers can reach puberty at just 55% of mature weight. According to Perry, the risk of using the 55% benchmark outweighs the reward.

“If the goal is to get more heifers bred early, stay conservative and use the 60-65% of mature weight as your benchmark,” says Perry. “Higher weights give you insurance heifers have had time to develop and are more sexually mature.”

An emphasis on nutrition is rightfully put during the critical phase between weaning and breeding when heifers are adding size to reach the 65% mature weight threshold. It is also vital to ensure heifers receive adequate nutrition following breeding.

Know when heifers are cycling

When heifers have reached their weight goal, there are a number of options to determine if heifers have gone through puberty and can breed.

Reproductive tract scoring is a common method used to verify if heifers are pubertal by palpating the reproductive tract and ovaries for size of follicles and to determine if a corpus luteum is present. A trained technician or veterinarian can perform this procedure, but it can be cost-prohibitive with charges ranging from $3-5 per heifer. If you’re in a region with a high demand for veterinary services, scheduling may also be a challenge.

Another way to identify pubertal heifers is to spend time watching them daily. However, watching your animals takes time and you can’t watch them 24/7 resulting in some getting missed.

According to Perry, the best option is using a breeding indicator.

Breeding indicators help visually show when heifers have started becoming pubertal by expressing estrus. The indicators are applied between the hip and tailhead. As mounting activity occurs, the patch surface ink rubs off to expose a bright indicator color. You can monitor estrus activity as you have time and get a quick visual representation of when heifers are ready for breeding.

“If heifers have been properly developed to approximately 65% of mature body weight, then 80% or more of the heifers should have activated breeding indicators during those 30 days. This will indicate the heifers are sexually mature and ready to breed,” says Perry.

Once you know that heifers are pubertal, you can either set them up with a synchronization protocol for artificial insemination or expose them to a bull. Those heifers that aren’t showing signs of cycling can then be sold as their odds of becoming pregnant are lower.

Breed a cycle ahead

One tactic to consider is breeding your heifers one estrous cycle (or approximately 21 days) ahead of when you breed mature cows.

At the point heifers are calving for the first time, they are still growing and adding more frame to reach their mature weight. Plus, they’re lactating which puts additional energy demands on them. These factors make first-calf heifers notoriously hard to get cycling again. Achieving a second pregnancy can be a make or break situation.

“By breeding replacement heifers a cycle ahead of the mature herd, you allow them more recovery time after calving,” says Perry. “Extra recovery time allows heifers to prepare for the subsequent breeding season, and gives them better odds of achieving a second pregnancy and staying in the herd.”

“Overall, the goal of any heifer development program from weaning to breeding is to get animals to reach maturity, cycle and maintain a pregnancy. In reaching this goal, we can recover the cost of development by greatly increasing the likelihood heifers will stay in the herd long-term,” says Perry.

The ESTROTECT Breeding Indicator is the industry standard for optimizing cattle breeding efficiency and economics. With millions and millions of units sold around the world, ESTROTECT is the only breeding management tool tested in a multitude of university studies by industry researchers.