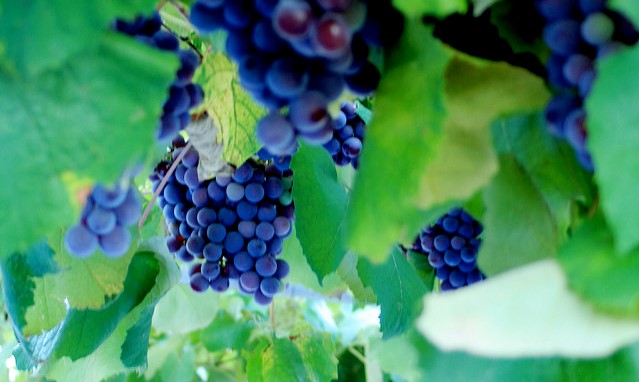 One jar held the greatest surprise: pure grape wine from 5,000 years ago. The Monte Kronio samples represented the oldest wine known so far for Europe and the Mediterranean region. (Falk Lademann, Flickr/Creative Commons)

TAMPA, Fla. (THE CONVERSATION) — Monte Kronio rises 1,300 feet above the geothermally active landscape of southwestern Sicily. Hidden in its bowels is a labyrinthine system of caves, filled with hot sulfuric vapors. At lower levels, these caves average 99 degrees Fahrenheit and 100 percent humidity. Human sweat cannot evaporate and heat stroke can result in less than 20 minutes of exposure to these underground conditions.

Nonetheless, people have been visiting the caves of Monte Kronio since as far back as 8,000 years ago. They’ve left behind vessels from the Copper Age (early sixth to early third millennium B.C.) as well as various sizes of ceramic storage jars, jugs and basins. In the deepest cavities of the mountain these artifacts sometimes lie with human skeletons.

Archaeologists debate what unknown religious practices these artifacts might be evidence of. Did worshipers sacrifice their lives bringing offerings to placate a mysterious deity who puffed gasses inside Monte Kronio? Or did these people bury high-ranking individuals in that special place, close to what was probably considered a source of magical power?

One of the most puzzling of questions around this prehistoric site has been what those vessels contained. What substance was so precious it might mollify a deity or properly accompany dead chiefs and warriors on their trip to the underworld?

Using tiny samples, scraped from these ancient artifacts, my analysis came up with a surprising answer: wine. And that discovery has big implications for the story archaeologists tell about the people who lived in this time and place.

In November 2012, a team of expert geographersand speleologists ventured once again into the dangerous underground complex of Monte Kronio. They escorted archaeologists from the Superintendence of Agrigento down more than 300 feet to document artifacts and to take samples. The scientists scraped the inner walls of five ceramic vessels, removing about 100 mg (0.0035 ounces) of powder from each.

I led an international team of scholars, which hoped analyzing this dark brown residue could shed some light on what these Copper Age containers from Monte Kronio originally carried. Our plan was to use cutting-edge chemical techniques to characterize the organic residue.

We decided to use three different approaches. Nuclear magnetic resonance spectroscopy(NMR) would be able to tell us the physical and chemical properties of the atoms and molecules present. We turned to scanning electron microscopy with energy dispersive X-ray spectroscopy (SEM/EDX) and the attenuated total reflectance Fourier transform infrared spectroscopy (ATR FT-IR) for the elemental analysis – the chemical characterization of the samples.

These analysis methods are destructive: The sample gets used up when we run the tests. Since we had just that precious 100 mg of powder from each vessel, we needed to be extremely careful as we prepared the samples. If we messed up the analysis, we couldn’t just run it all over again.

We found that four of the five Copper Age large storage jars contained an organic residue. Two contained animal fats and another held plant residues, thanks to what we inferred was a semi-liquid kind of stew partially absorbed by the walls of the jars. But the fourth jar held the greatest surprise: pure grape wine from 5,000 years ago.

Presence of wine implies much more

Initially I did not fully grasp the import of such a discovery. It was only when I vetted the scientific literature on alcoholic beverages in prehistory that I realized the Monte Kronio samples represented the oldest wine known so far for Europe and the Mediterranean region. An incredible surprise, considering that the Southern Anatolia and Transcaucasian region were traditionally believed to be the cradle of grape domestication and early viticulture. At the end of 2017, research similar to ours using Neolithic ceramic samples from Georgia pushed back the discovery of trace of pure grape wine even further, to 6,000-5,800 B.C.

This idea of the “oldest wine”conveyed in news headlines captured the public’s attention when we first published our results.

But what the media failed to convey are the tremendous historical implications that such a discovery has for how archaeologists understand Copper Age Sicilian cultures.

From an economic standpoint, the evidence of wine implies that people at this time and place were cultivating grapevines. Viticulture requires specific terrains, climates and irrigation systems. Archaeologists hadn’t, up to this point, included all these agricultural strategies in their theories about settlement patterns in these Copper Age Sicilian communities. It looks like researchers need to more deeply consider ways these people might have transformed the landscapes where they lived.

The discovery of wine from this time period has an even bigger impact on what archaeologists thought we knew about commerce and the trade of goods across the whole Mediterranean at this time. For instance, Sicily completely lacks metal ores. But the discovery of little copper artifacts – things like daggers, chisels and pins had been found at several sites – shows that Sicilians somehow developed metallurgy by the Copper Age.

The traditional explanation has been that Sicily engaged in an embryonic commercial relationship with people in the Aegean, especially with the northwestern regions of the Peloponnese. But that doesn’t really make a lot of sense because the Sicilian communities didn’t have much of anything to offer in exchange for the metals. The lure of wine, though, might have been what brought the Aegeans to Sicily, especially if other settlements hadn’t come this far in viticulture yet.

Ultimately, the discovery of wine remnants near gaseous crevices deep inside Monte Kronio adds more support to the hypothesis that the mountain was a sort of prehistoric sanctuary where purification or oracular practices were carried out, taking advantage of the cleansing and intoxicating features of sulfur.

Wine has been known as a magical substance since its appearances in Homeric tales. As red as blood, it had the unique power to bring euphoria and an altered state of consciousness and perception. Mixed with the incredible physical stress due to the hot and humid environment, it’s easy to imagine the descent into the darkness of Monte Kronio as a transcendent journey toward the gods. The trek likely ended with death for the weak, maybe with the conviction of immortality for the survivors.

And all of this was written in the grains of 100 milligrams of 6,000-year-old powder.

This article is republished from The Conversation under a Creative Commons license. Read the original article here: http://theconversation.com/prehistoric-wine-discovered-in-inaccessible-caves-forces-a-rethink-of-ancient-sicilian-culture-89116.