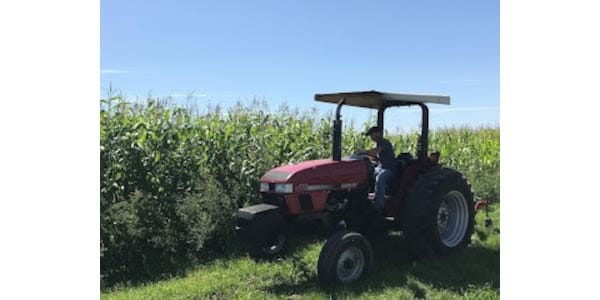 MINNEAPOLIS — Harvest will soon be in full swing. Take the time now to mow fence line weeds or field edges to prevent or minimize seed production. Field edges are often where weed infestations start. By eliminating fence line weeds, we prevent combine harvesters from picking up weed seeds from the field edges and pulling them into the field where they can be further spread by harvesting and tillage equipment.

Most weeds common to corn and soybean fields are in the flowering and seed development stages of their life cycle. This means that there is still time to control some weeds before they can produce viable seed.

Viable seeds may have already been produced by early-maturing broadleaf weeds like lambsquarters, kochia, and redroot pigweed. Later-maturing weeds, like giant and common ragweed, are still pollinating in many areas of Minnesota.

Waterhemp and other pigweed species can produce viable seed within 10 days of pollination, according to University of Illinois research, so it’s important to control weeds soon after they begin flowering. In addition, waterhemp is a prolific seed producer generating about 250,000 seeds per plant, although some plants can produce 1 million or more seeds under optimal conditions in noncompetitive environments.

What if seeds are already present? Is it too late?

In scouting fence line weeds, you may find some of the earlier-maturing weeds, like kochia or redroot pigweed, that have already produced seed. Although seeds are present, they may be less viable now compared to when they reach maturity in the next couple of weeks.

Research conducted at Michigan State University and the University of Delaware has found that terminating common ragweed, common lambsquarters, giant foxtail, jimsonweed, and velvetleaf before weed seeds reach maturity can reduce inputs into the seed bank by 64 to 100 percent. Although it is best to control fence line weeds before seed production occurs, mowing weeds while seeds are still developing can drastically reduce viable inputs into the weed seed bank.

Pay attention to, and make notes of weeds along roadsides, in shelterbelts and waterways, and in areas of fields that are subject to flooding or where wildlife may congregate or travel. Since combines are an effective dispersal mechanism, check field entrances for new weeds and be on the lookout for noxious weeds like Palmer amaranth. Now is a good time to detect new weed infestations before seeds are moved further into fields with equipment.

Despite the drought conditions in much of Minnesota this year, weeds have continued to grow in fields and field edges because they have long been adapted to arid climates. Since combines, tillage equipment, wind, and rain can all contribute to weed seed movement, it is important that farmers assess late summer weed growth and do what they can to limit weed seed production.

The window for reducing weed seed production via mowing is rapidly closing, but farmers are encouraged to do what they can to get a better handle on the weed seed bank and prevent these weeds from moving further into the field. If weed patches aren’t mowed, consider harvesting around these areas to prevent spreading weed seeds throughout the field. 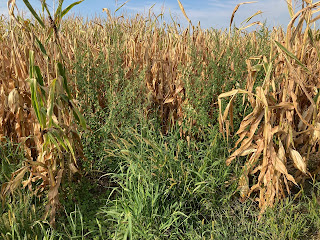 Can you take a nitrogen credit following sweet corn?

Dakota Gardener: Now is the time to kill weeds in lawns
October 4, 2021

The atrocious summer 2021 growing season in the Treasure Valley of Oregon and Idaho
August 29, 2021