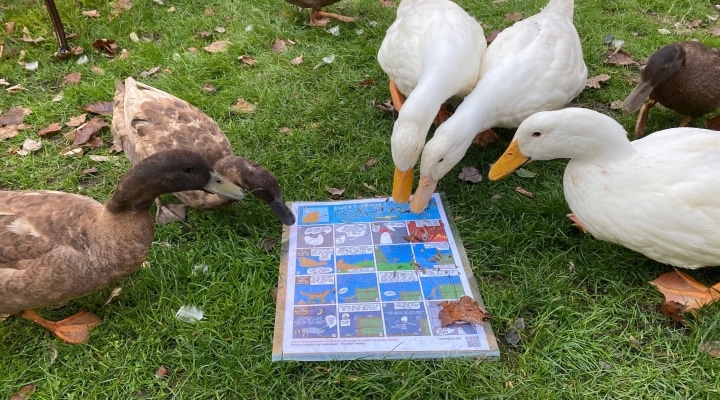 Says Henry, “Predator proofing is important because predators can be persistent.  Raccoons and hawks may take residence near your coop, and try to kill your birds!”  Henry, a 4-H member since 2018, created “Ducky Comics” this summer and has released multiple comics to support 4-H programs.  In September, Henry announced over $800 raised for NYS 4-H, by promoting his comics online and around New York State.  “Ducky Comics” received recognition from several 4-H programs, including Putnam County in Brewster, New York, Clinton County in Plattsburgh, New York, Swain County in Bryson City, North Carolina, and Indian River County in Vero Beach, Florida.

Created using ink, paper, and the graphic design app Pixelmator, Henry’s comic encourages readers to add specific materials to their backyard coop, and suggests strategies for each predator.  Henry was inspired by his experience with predators: “I have been through many losses myself, so to help prevent the loss of chickens for others I made this comic.”  The cartoonist has been building his own coop over the past two years, developing a focus on hosting more animals.  Henry says , “I have watched racoons and other predators in action, and know how smart they are.”  He has used his knowledge of hawks, dogs, and racoons to both protect his coop, and to organize these predator proofing concepts into easy-to-follow steps.

Says Henry, “I want readers to enjoy reading the comics, while also preventing losses of chickens and ducks.  By using this comic as a guide, readers can predator-proof their own coop!”  Henry plans to continue the How to Predator Proof a Chicken & Duck Coop series, by releasing future issues featuring strategies for coyotes, foxes, and bears.  Henry, a Westchester County native, has been learning from the book “What’s Killing My Chickens?” by Gail Damerow.  For more information regarding Henry’s “Ducky Comics,” email duckycomics2020@gmail.com or visit DuckyComicsNY.com.