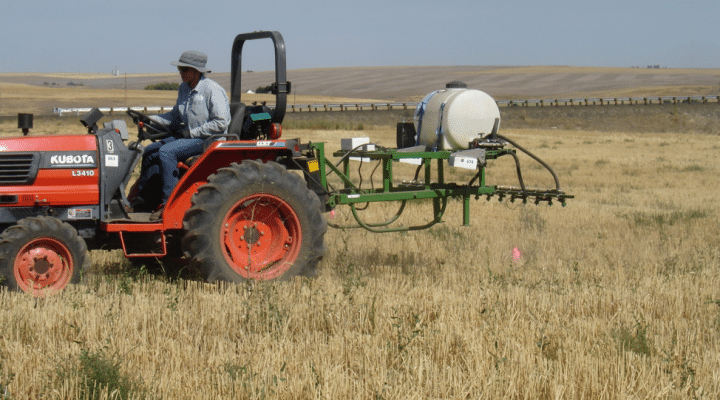 PULLMAN, Wash. — Continuing with the precision agriculture topic (also known as digital agriculture) that my colleagues have mentioned during the past few weeks, I concur that it offers new possibilities to advance sustainability and efficiency in agriculture. However, in my opinion, each of the different technologies mentioned (the use of drones, unmanned vehicles (robots), precision flamers, lasers, etc.) could have particular cropping systems (situations) where they fit better to save costs while improving weed control.

One precision technology, that has not been mentioned so far and that can be beneficial for some of the cropping systems in the region, and particularly for the winter wheat – fallow rotation, is real-time precision spraying systems that do not require a weed map for the spot application. These systems are designed to differentiate weeds from soil with optical sensors that turn individual spray nozzles on and off to minimize coverage of weed-free soil. Two optical spot spraying systems that are currently available to farmers in the region and have the potential of reducing herbicide costs are WEED-IT® and WeedSeeker®.

We recently conducted a study to compare WEED-IT and WeedSeeker precision spraying systems to uniform spraying in fallow and post-harvest (Image above) that I would like to share with you. We found that uniform spraying might provide greater herbicide efficacy than precision spraying systems when applying similar herbicide rates. However, herbicide efficacy was similar when higher herbicide rates were used with precision sprayers. It seems that the use of higher rates overcomes issues related to suboptimal weed detection or herbicide coverage. However, I would like to explore these preliminary findings further because their efficacy also seems related to application time and species present.

Although WEED-IT and WeedSeeker (from Trimble) are based on the same concept, both sprayers offer important differences that I encourage growers to consider before purchasing. A couple of important differences that I would like to point out are 1) that WEED-IT has one sensor per five nozzles while WeedSeeker has one sensor per nozzle, and 2) that WeedSeeker requires background sensor calibration while WEED-IT does it on the go. The newer WeedSeeker is called “WeedSeeker 2” and brings improved technology compared to the older model, which I have at the research station. Regardless of the spraying system, it has been my experience that setting up the sprayer will take some time to achieve optimal performance.In summary, the advantages of precision spraying systems include the ability to:

Pesticide use near schools and childcare facilities