Subscribe
Home / Michigan / Precision farming comes into its own 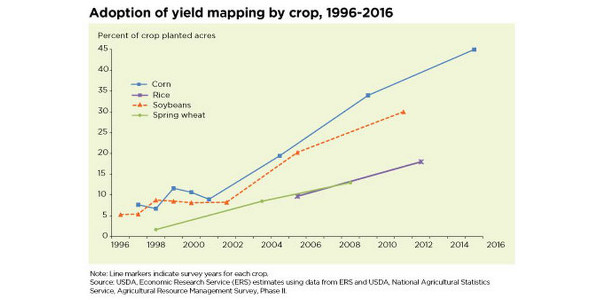 EAST LANSING, Mich. — Technological advancements are shaping the way farmers farm. According to a 2017 survey done by Michigan State University (MSU) researchers, a majority of Michigan growers are adopting at least some tactics of precision agriculture, including production manager Trever Meachum, whose family operates a third-generation, 5,000-acre farm of fruits, vegetables and field crops in Hartford, Michigan.

Meachum uses GPS for soil sample testing and for planting and spraying fields. He uses drones for field scouting, precision technology to help produce yield maps and electronic payroll techniques that track labor output. Though the technology doesn’t necessarily make his job significantly easier, he said it does boost production.

“Technology has also allowed us to be more efficient and more economically driven,” Meachum said. “We see results with savings on fertilizer and seeds. It has shown a return and is better for the environment by not spraying or fertilizing where you don’t need to.”

Meachum is not alone. According to the annual Agricultural Resources and Environmental Indicators report by the USDA’s Economic Research Service, adoption of variable-rate input application, crop yield mapping and guidance systems for tractors and combines have all increased over the past two decades.

But, despite increased adoption rates, the total percentage of crops planted using yield mapping technology and variable-rate technology nationwide remains low. That rate is under 50 percent for corn producers and much lower for other crops. Guidance systems have the highest adoption rates – anywhere from 30 to 65 percent depending on the crop – with corn growers again leading the pack.

In general, large farms have been quicker to adopt precision agriculture techniques across the board. The financial burdens of acquiring the technology are generally the main reason that small farm operators are less likely to purchase advanced technology tractors and equipment, said Scott Swinton, University Distinguished Professor in the MSU Department of Agricultural, Food and Resource Economics.

“These technologies are available to everyone – it just might be unwise for some farmers to choose to use them,” Swinton said. “It’s like buying a Mack truck when you only need a Chevrolet sedan. Yeah, you could do more things with the Mack truck, but it would be very expensive, and do you really need to do all of those things? It’s just not the sensible choice for some small farmers.”

Swinton said some of the recognized barriers to precision agriculture adoption are the complexity and high cost of new equipment.

“What shapes rates of adoption of the techniques varies, but the biggest factor is cost,” Swinton said. “Most new precision ag technology is embodied in equipment, but people don’t change equipment every year. Then you have late adopters of new technology and farmers who don’t have local access to equipment servicing, or they say, ‘I’m 75, and I’m going to farm the way I’ve always farmed.’”

Meachum said a lack of readily available high-tech service and maintenance can cause issues as well.

“If we have something break down or a lapse of communication, we need an IT person to help us,” he said. “We have to get on the phone with someone who is nowhere close, talk through the problem, and if it’s on the weekend we have to shut down production until someone can fix it. In the old days, you would just drive to the shop, fix it or get the part, and go back to work. Our equipment has to work rain or shine, and that’s where the biggest challenge is in getting the support.”

“Precision agriculture is a set of technologies that can be used to support farming decisions that allow farmers who practice mechanized agriculture to manage with a level of site specificity and care that we historically associated with more manual agriculture,” Swinton said.

Farmers use these technologies in a variety of ways.

“When I think of precision agriculture, I think of GPS-driven tractors first,” said Ron Goldy, MSU Extension vegetable production educator. “That’s where the growers I work with use it the most – to get their rows nice and straight. I have one grower I talked to that had these straight-as-arrow rows. In one 50-acre field, they were able to get more into that field to increase the plant population per acre and therefore produce more yield per acre.

“It also helps apply soil amendments and nutrients more precisely. So, rather than treating the field as one unit, they can treat it as individual sections to maximize nutrient use and minimize their environmental effect.”

The decision to invest in precision agriculture ultimately comes down to the individual farmer and whether he/she believes the upgrades will pay off.

“If they are a smaller operation, then they generally don’t have much of the high-tech stuff because of the expense involved. If they are medium-sized, they are starting to look at it and play with it. If they are a larger operation, they generally have it,” Goldy said. “You have to reach a certain size before the expense pays off. You’re going to have to prove to the farmers that they can do better using these newer methods.”

Robotics could shift the perspective of smaller farmers on the value of precision technology.

Swinton points to the transformation of the dairy industry through the use of robotic milking machines, which allows cows to be milked as they need it, as an example.

“That turned out to be a boon for small-scale dairy farmers, including part-timers, who are now liberated from having to bring in all the cows to a milking parlor a couple times a day,” he said. “We are beginning to see that robotic precision agriculture is around the corner, and with fully automated equipment you have new possibilities. You can farm night and day, and you don’t need to have fields that are large or regularly shaped. It raises the possibility that automated crop management equipment could begin to aid part-time, small-scale farmers—especially if used on a custom-hire basis.”

Swinton projects the use of drone sensing equipment to rise, among other advancements.

“Drones and robotics are the future,” he said. “I think we may see a growth in ‘just-in-time’ scouting for pests and diseases and that will be done with drones and other forms of aerial scouting.”

Ultimately, Meachum believes that adoption rates will come down to cost of technology versus the amount of yield that technology produces.

“Whenever a farm can become more efficient through the use of technology and other sources, it allows you to be more profitable,” he said. “With the current marketing conditions, low prices and low margins, anytime you can save on input that equals potential profit.”

This article was published in Futures, a magazine produced twice per year by Michigan State University AgBioResearch. To view past issues of Futures, visit www.futuresmagazine.msu.edu. For more information, email Holly Whetstone, editor, at whetst11@msu.edu or call 517-355-0123.

Highland thanks supporters and friends
July 9, 2019