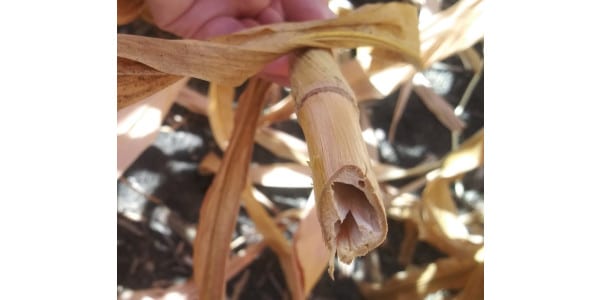 MINNEAPOLIS — Corn in many fields in Minnesota is rapidly approaching maturity, while corn in other fields that has been under more severe drought stress has already reached maturity. Corn typically reaches maturity at about 60 days after the start of silking, but this can occur more quickly under drought stress. At maturity, the kernel milk line is no longer visible and there is a black layer at the tip of kernels where they connect to the cob. The black layer can be identified by scratching off tissue at the tip of kernels or cutting kernels lengthwise.

Corn grain contains around 32% moisture when the kernels first reach maturity. The optimal grain moisture at which to begin corn grain harvest is a balance among many factors, including the risk of ear loss due to stalk lodging or dropped ears, the likelihood of wet weather and its potential for slowing harvest and favoring the development of ear rots and pre-harvest losses, time required for harvest, grain price, and drying cost. Based on these factors, it is often optimal to begin corn harvest once grain moisture has reached 24 to 25%.

The rate at which corn grain dries in the field is influenced by solar radiation, air temperature, wind speed, and relative humidity. It is also affected by hybrid husk characteristics and how soon ears turn down after plants reach maturity. Typical in-field drying rates for corn grain in Minnesota are:

Scout fields for stalk quality after corn has reached maturity. Factors that reduce stalk quality include drought stress during the grain-filling period in August and September, European corn borer tunneling in stalks, and other stress-inducing factors such as severe corn rootworm injury to roots, corn following corn, a high plant population, and a reduction in effective leaf area due to hail or diseases. Fields with poor stalk quality should be moved to the top of the harvest list to avoid risk of severe stalk lodging following high winds prior to harvest.

When scouting, note the percentage of stalk-lodged plants, indicated by a stalk that is broken below the ear. Also assess stalk quality of non-lodged plants. This can be done by pushing plants 10 inches to the side at ear level, or pinching or cutting the stalk in the first internode above the brace roots. Stalks that break after being pushed or pinched, or have a hollow stalk are at risk of stalk lodging. Evaluate several plants in multiple places in each field to accurately assess stalk quality. Fields with 10 to 15% or more of the stalks lodged, breaking after being pushed or pinched, or hollow are at risk of severe stalk lodging and should be harvested early.

When scouting fields for stalk quality, also check for ear rots by removing husks from several ears in multiple places of each field. Of potential concern this year is Aspergillus ear rot, which is favored by hot and dry conditions during the growing season, followed by wet conditions after crop maturity and before harvest. Aspergillus ear rot produces a mycotoxin known as aflatoxin, which can impair grain marketability and the health of livestock it is fed to. Fungi that cause ear rots can grow until grain moisture drops below 15%. Therefore, in fields with a considerable amount of ear rot, consider harvesting early and drying the grain to less than 15%, rather than waiting for in-field dry-down of grain and increased development of ear rots. More information on ear rots is available in an article from the crop protection network (6.0 MB PDF).

Ear drop is typically due to European corn borer tunneling in ear shanks, but it can also occur when ear shanks become weak and turn down earlier than normal due to late-season drought. Ear drop can be greater when harvest is delayed, especially due to wet weather. Earlier harvest may be necessary in fields where ear drop is substantial and expected to increase.

In late August, high winds and tornados in parts of southwestern Minnesota caused severe lodging of corn. Harvest considerations for storm-damaged corn are discussed in a previous Crop News article.

Know where and when to apply fall nitrogen fertilizer