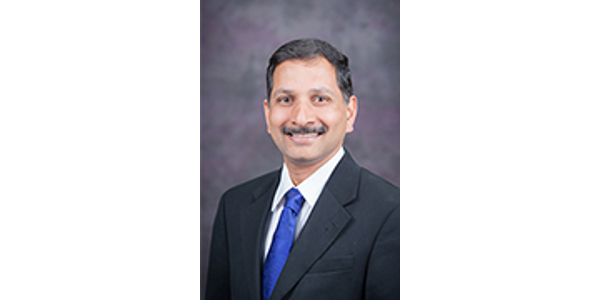 P.V. Vara Prasad has been elected to lead the Crop Science Society of America, a Madison, Wisconsin-based, professional international society which fosters the mission of plant science for a better world. (Courtesy of K-State Research and Extension)

MANHATTAN, Kan. — P.V. Vara Prasad, Kansas State University Distinguished Professor in the Department of Agronomy and director of Feed the Future Innovation Lab for Collaborative Research on Sustainable Intensification, has been elected to lead the Crop Science Society of America. This is a three-year commitment, and he will serve as the society’s president-elect in 2020, president in 2021 and past president in 2022.

Prasad is the first K-State faculty member elected to serve as the president of the CSSA.

The Crop Science Society of America is a professional international society which fosters the mission of plant science for a better world. Based in Madison, Wisconsin, and founded in 1956, the CSSA has more than 5,000 members dedicated to advancing the field of crop science through research, teaching and extension activities.

The society has nine divisions, including crop breeding and genetics, crop physiology and metabolism, seed physiology, production and technology, turfgrass science, genomics and biotechnology. The CSSA also collaborates with its sister organizations, the American Society of Agronomy and the Soil Science Society of America – with a collective membership of more than 12,000 individuals around the world contributing to advancement of crop science, agronomy and soil science.

“My vision for the CSSA would be to promote crop science as the foundation for agriculture as it provides nutritious, healthy, safe food for humans and animals,” Prasad said. “We can accomplish this vision by working together as a team to promote scientific innovation, outreach and increased funding for research, education and extension. We also need to work on leveraging resources, encouraging international cooperation, enhancing diversity, communicating strategically, and promoting science for effective public policy.”

Prasad said strategic messaging to attract young people including high school students, undergraduate and graduate students, in crop sciences is critical for the sustainability of the CSSA and the creation of the next generation of scholars to address the challenge of enhancing crop productivity, ensuring global food and nutritional security. He noted the active and efficient use of communication tools, including social media engagement and website management, is required in order to connect with a wider audience.

Nina Lilja, associate dean of international agriculture, added, “We are excited by this recognition of Vara Prasad, indicating how he has made an impact in the crop science profession. I cannot think of anyone more suitable and experienced to lead the CSSA, and we look forward to seeing many accomplishments during his tenure.”

Chuck Rice, University Distinguished Professor and former president of Soil Science Society of America, said, “The position comes with many responsibilities, but it also provides an opportunity to contribute to the profession and serve the membership, as well as enhancing your leadership skills and ability to influence policy and research, extension and teaching goals.”

Prasad is recognized internationally for his research on understanding the responses of food grain crops to changing environments (temperature and water) and developing best management practices for the efficient use of inputs using systems approaches. He is passionate about international agriculture and capacity building of graduate students, scholars and institutions.

He has ongoing research, education and extension activities in several countries in Africa and Asia. He has published more than 220 peer reviewed journal articles and book chapters, with his research being cited over 9300 times. He has been instrumental in obtaining more than $70 million in grants and gifts for K-State programs and he has trained more than 100 international research scholars and graduate students from 23 countries. In addition, he has been invited and has traveled to give presentations in approximately 40 countries around the globe and served as a member of the editorial boards of nine different international journals.

Prasad has also received several competitive awards and recognitions for his research, education, extension, service, and leadership activities. These include the Early Career Award, the Outstanding Research Award, and the Distinguished Faculty Award from Gamma Sigma Delta, the Outstanding Scientist Award from Sigma Xi, the Excellence in Graduate Teaching Award from the College of Agriculture, the International Educator Award from the Office of the International Programs, the Distinguished Graduate Faculty Award from Commerce Bank and W.T. Kemper Foundation, the Dr. Ron and Rae Iman Outstanding Faculty Award from Kansas State University, and the Irvin E. Young Award in Applied Sciences from Higuchi Research Endowment at the University of Kansas.

He is an elected fellow of the Crop Science Society of America, the American Society of Agronomy, and the American Association for the Advancement of Sciences. Being chosen as a Fellow is the highest honor recognized by these professional societies.

Prasad joined K-State as an Assistant Professor in the Department of Agronomy in 2005 and was promoted to Associate Professor in 2009 and to Professor in 2013. He served as the Director of the Center for Sorghum Improvement at K-State from 2009 to 2016 and he was named a University Distinguished Professor in 2016. Prasad received his bachelor of science degree in 1991 and master of science degree in 1993 from Andhra Pradesh Agricultural University in India and his PhD in 1999 from The University of Reading in the United Kingdom. After completing of his doctoral degree, he worked at the University of Florida as Postdoctoral Research Fellow before coming to K-State.