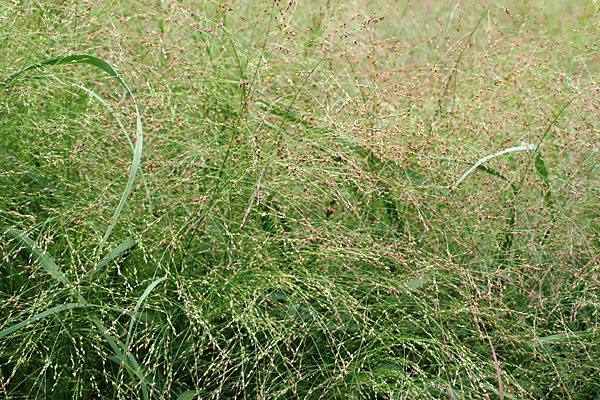 In findings published in the journal Biofuels, Bioproducts & Biorefining, researchers describe how farmers could raise enough bioenergy crops to make nitrogen-based fertilizers more cheaply and reduce the reach of those fertilizers into nearby waterways. (Purdue Agricultural and Biological Engineering photo/Chad Martin)

WEST LAFAYETTE, Ind. — Nitrogen-based fertilizer contributes to the high yields expected from crops in the developed world, but its high use also damages nearby waters and ecosystems. Conversely, developing countries that most need yield improvements face bottlenecks in getting those fertilizers because of high costs and low crop prices.

Purdue University scientists, led by Nick Carpita, a professor in the Department of Botany and Plant Pathology, believe there’s a way to solve both problems. In findings published in the journal Biofuels, Bioproducts & Biorefining, researchers describe how farmers could raise enough bioenergy crops to make nitrogen-based fertilizers more cheaply and reduce the reach of those fertilizers into nearby waterways.

“Use of biomass as the source of hydrogen and energy for ammonia fertilizer is competitive with electricity as a replacement for natural gas or other fossil fuels. Moreover, the integration of a perennial biomass crop as a border row to food crops is particularly appealing because it provides the substrates for fertilizer production while mitigating the environmental impact of excess nitrogen,” the authors wrote.

Carpita, Maureen McCann, professor in the Department of Biological Sciences; Rakesh Agrawal, Purdue’s Winthrop E. Stone Distinguished Professor of Chemical Engineering; Gary Burniske, managing director of the Purdue Center for Global Food Security; and other Purdue researchers estimate that farmers could use 5% or less of their fields to grow enough bioenergy crops, such as sweet sorghum or a perennial grass such as switchgrass, to create the fuel needed to produce nitrogen fertilizers like ammonia.

Not only would using bioenergy be a cleaner environmental choice than natural gas or coal, but the crops could be used on the edges of fields as buffers to limit the amount of nitrogen that washes from those fields into local waters.

“It’s a small amount of a grower’s acreage to make the energy needed to completely satisfy the fertilizer needs for an entire field. You could apply 150 pounds of nitrogen per acre, which is more than enough, and you’d need only 5% of biomass per acre,” Carpita said. “The biomass has a bonus. Where you grow it could improve ecology. Your biomass could create soil-trapping, erosion-breaking rows that improve the local watershed.”

The biomass crops could be gasified directly or turned into H2Bioil for transport to the gasifier, giving a source of hydrogen needed for ammonia and energy to power the production. The study shows that it costs about $54 for enough natural gas to create 150 kilograms of ammonia. Equivalent electricity or biomass costs in developed nations are currently about four times that, meaning production costs would have to drop or natural gas prices rise significantly to make the process cost-effective.

But it could be beneficial still in developing countries where mobile processing plants or smaller chemical plants could bring production close to farms that lack access to nitrogen-based fertilizers. Those smaller facilities don’t yet exist, but Agrawal said his team is working on developing them.

“We chemical engineers are used to building large plants. We have to rethink not only the unit operations, but how we’re going to simplify everything in a plant to make it function at a smaller distributed scale,” Agrawal said. “The good thing is that we have begun to work on it. This could happen within the decade.”

Burniske said the biomass strategy for ammonia production likely would be feasible sooner in sub-Saharan Africa, where soils are low in nitrogen and there is little fertilizer production in the region.

“Africa is the most nitrogen fertilizer-deficient region in the world, and where fertilizer is available, it is expensive, of poor quality and out of the smallholder farmer’s reach,” Burniske said.

An area in East Africa – where countries are smaller and could share a large production facility, and have the transportation infrastructure to deliver – could use the biomass strategy to create affordable nitrogen-based fertilizers.

“The reduction in fertilizer cost and accompanying increase in quality would boost use by smallholder farmers and increase yields in areas where there are large populations of food-insecure people,” Burniske said. “Horticultural crops in particular would benefit because they are more demanding in nitrogen intake, and horticultural crops are high in micronutrients in a region where micronutrient deficiency is rampant. Farmers producing more high-value horticultural crops would see a boost in income and a multiplying effect increasing economic development in rural communities.”

The authors dedicated their paper to fellow author Wally Tyner, who was the James and Lois Ackerman Professor of Agricultural Economics at Purdue, a senior fellow for the U.S. Association for Energy Economics and a U.S. Sen. Richard Lugar “Energy Patriot.” Tyner died last year.

The U.S. Department of Energy funded the research.

Helping farmers during pandemic
May 11, 2020