Home / National / Powerful sensors on planes detect crop nitrogen with high accuracy
A new user experience is coming! We'll be asking you to login to your Morning Ag Clips account March 1st to access these new features.
We can't wait to share them with you! Read more here. 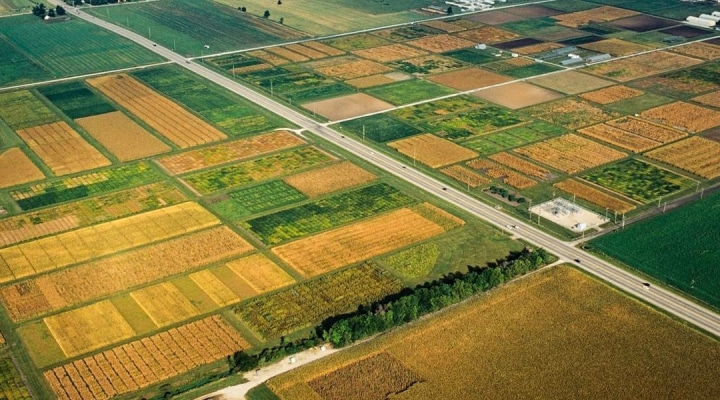 URBANA, Ill. – Synthetic nitrogen fertilizers transformed agriculture as we know it during the Green Revolution, catapulting crop yields and food security to new heights. Yet, despite improvements in crop nitrogen use efficiency, fears of underperformance spur fertilizer overapplication to this day. Excess nitrogen then ends up in waterways, including groundwater, and in the atmosphere in the form of potent greenhouse gases.

Predicting the amount of nitrogen needed by a particular crop in a particular year is tricky. The first step is understanding crop nitrogen status in real time, but it’s neither realistic nor scalable to measure leaf nitrogen by hand throughout the course of a season.

In a first-of-its-kind study, a University of Illinois research team put hyperspectral sensors on planes to quickly and accurately detect nitrogen status and photosynthetic capacity in corn.

“Field nitrogen measurements are very time- and labor-consuming, but the airplane hyperspectral sensing technique allows us to scan the fields very fast, at a few seconds per acre. It also provides much higher spectral and spatial resolution than similar studies using satellite imagery,” says Sheng Wang, research assistant professor in the Agroecosystem Sustainability Center (ASC) and the Department of Natural Resources and Environmental Sciences (NRES) at U of I. Wang is lead author on the study.

“Our approach fills a gap between field measurements and satellites and provides a cost-effective and highly accurate approach to crop nitrogen management in sustainable precision agriculture,” he adds.

The plane, fitted with a top-of-the-line sensor capable of detecting wavelengths in the visible and near infrared spectrum (400-2400 nanometers), flew over an experimental field in Illinois three times during the 2019 growing season. The researchers also took in-field leaf and canopy measurements as ground-truth data for comparison with sensor data.

The flights detected leaf and canopy nitrogen characteristics, including several related to photosynthetic capacity and grain yield, with up to 85% accuracy.

“That’s close to ground-truth quality,” says Kaiyu Guan, co-author on the study, founding director of the ASC, and associate professor in NRES. “We can even rely on the airborne hyperspectral sensors to replace ground-truth collection without sacrificing much accuracy. Meanwhile, airborne sensors allow us to cover much larger areas at low cost.”

Remote sensing picks up energy reflected from surfaces on the ground. The chemical composition of leaves, including their nitrogen and chlorophyll content, subtly changes how much energy is reflected. Hyperspectral sensors detect differences of just 3 to 5 nanometers across their entire range, a sensitivity unmatched by other remote sensing technologies.

“Other airborne remote sensing technologies pick up the visible spectrum and possibly near-infrared, just four spectral bands. That’s not even close to what we can do with this hyperspectral sensor. It’s really powerful,” Guan says.

Importantly, the research team worked out the best mathematical algorithm to detect nitrogen reflectance data from the hyperspectral sensor. They expect it will be put to use as newer technologies come on board.

“NASA is planning a new satellite hyperspectral mission, as are other commercial satellite companies. Our study can potentially provide the algorithm for those missions because we already demonstrated its accuracy in the aircraft hyperspectral data,” Wang says.

Guan says bringing this technology to satellites is the end goal, enabling a view of every field’s nitrogen status early in the growing season. The advancement will allow farmers to make more informed decisions about nitrogen side-dressing.

Ultimately, of course, the goal is to improve the environmental sustainability of nitrogen fertilizers in agronomic systems. And Guan says precision is the way to get there.

“Essentially, you can’t manage what you can’t measure. That is why we put so much effort into this technology.”

The article, “Airborne hyperspectral imaging of nitrogen deficiency on crop traits and yield of maize by machine learning and radiative transfer modeling,” is published in the International Journal of Applied Earth Observation and Geoinformation [DOI: 10.1016/j.jag.2021.102617]. This research was supported by the U.S. Department of Energy’s Advanced Research Projects Agency-Energy (ARPA-E) SMARTFARM (MBC Lab and SYMFONI) projects.

The Agroecosystem Sustainability Center is jointly established by the Institute for Sustainability, Energy and Environment (iSEE), the College of ACES, and the Office of the Vice Chancellor for Research and Innovation (OVCRI) at Illinois.

Corn and soybean production up in 2021