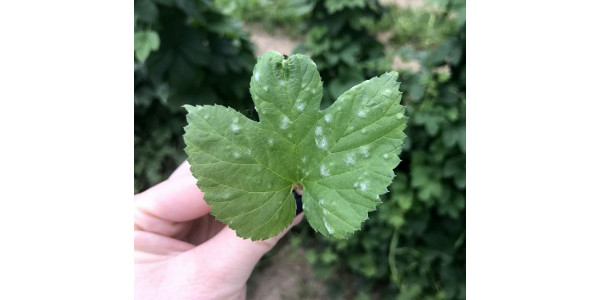 EAST LANSING, Mich. — In addition to downy mildew, Michigan hop growers should be actively scouting for and working to prevent powdery mildew. Powdery mildew (Podosphaera macularis) is an emerging disease in Michigan that may have serious implications for growers.

Hop powdery mildew is completely unrelated to hop downy mildew (Pseudoperonospora humuli); most Michigan growers are familiar with downy mildew. Powdery mildew was first detected in Michigan in 2014 and has been a concern on greenhouse and nursery plants—it has rarely been an issue in the field.

Mild conditions earlier this spring have resulted in significant powdery mildew disease on mature plants in hopyards without a history of disease. Powdery mildew has been found despite excellent downy mildew and weed management programs.

According to a 2009 study by Mahaffee et al., weather conditions that favor powdery mildew are reported to include low light levels resulting from cloud cover, canopy density, excessive fertility and high soil moisture. Leaf wetness from dew or rain does not directly impact powdery mildew infection, but results in high humidity and cloud cover, which favors disease, according to a 2005 study by Engelhard, et al.

Temperatures from 46 to 82 degrees Fahrenheit allow powdery mildew to develop, but is favored by temperatures of 64 to 70 F; disease risk decreases when temperatures exceed 75 F. Sexual spores (ascospores) may also be present in spring. Ascospores are discharged and land on newly emerged shoots where they germinate, infect the plant and eventually produce a new spore mass of asexual spores (conidia). Conidia are produced in large numbers over multiple cycles and are dispersed via wind, rain splash, insects, tractors, equipment and humans. Burrs and young cones are very susceptible to infection, which can lead to cone distortion, substantial yield reduction, diminished alpha-acid content, color defects and premature ripening. Cones become somewhat less susceptible to powdery mildew with maturity, although they never become fully immune to the disease. Infection during the later stages of cone development can lead to browning and hastened maturity.

Alpha-acids typically are not influenced greatly by late-season infections, but yield can be reduced by 20 percent or more due to shattering of overly dry cones during harvest resulting from early maturity. Several weak pathogens and secondary organisms can be found on cones infected by powdery mildew; limiting powdery mildew reduces these secondary organisms. The reaction of a hop variety to powdery mildew varies depending on where it is grown and which isolates of the fungus are present. ‘Mt. Hood,’ ‘Newport,’ ‘Nugget,’ ‘TriplePearl’ and several proprietary varieties possess a similar form of resistance that has historically rendered them immune to powdery mildew. However, powdery mildew isolates capable of infecting these varieties are now widespread in the Pacific Northwest.

‘Cascade’ has a different form of resistance to powdery mildew, but, similarly, isolates of the fungus exist in the Pacific Northwest that can also overcome its resistance. Many varieties have useful levels of field resistance or tolerance, such as ‘Comet.’ Selecting early-maturing varieties (e.g., ‘Fuggle’) can also help to escape late-season powdery mildew.

Powdery mildew management begins in early spring. In the Pacific Northwest, thoroughly removing all green tissue during pruning, including shoots on sides of hills and around poles or anchors, is important to limit disease. Mechanical pruning tends to be more effective than chemical pruning in eliminating flag shoots.

In growing regions like Michigan, with a short growing season and low powdery mildew pressure, early-season pruning has not been widely adopted and can result in poor productivity. Growers in the Midwest experiencing intense powdery infections may consider spring pruning. Where powdery mildew is a problem, regular fungicide applications are needed to protect susceptible varieties. Appropriate timing of the first fungicide application after emergence or pruning is important to keep disease pressure at manageable levels. This application should be made as soon as possible after shoot emergence, regrowth in pruned high-risk situations or when the disease is first detected in a region.

Different fungicides are utilized for powdery mildew control during three distinct periods of the season: emergence to mid-June; mid-June to bloom; and bloom to pre-harvest.

Many fungicide programs can give adequate disease control on leaves when applied preventively. On cones, however, differences among fungicides are substantial. Mid-July through early August is an essential disease management period. The fungicide quinoxyfen (Quintec) is especially effective during this time.

Fungicide applications alone are not sufficient to manage the disease. Under high disease pressure, mid-season removal of diseased basal foliage delays disease development on leaves and cones. Desiccant herbicides should not be applied until bines have grown far enough up the string so that the growing tip will not be damaged and bark has developed.

In trials in Washington, removing basal foliage three times with a desiccant herbicide provided more control of powdery mildew than removing it once or twice, particularly on cones. Established yards can tolerate some removal of basal foliage without reducing yield. This practice is not advisable in baby plantings (less than 3 years old), and may need to be considered cautiously in some situations.

Late-season powdery mildew can be easily confused with other diseases such as Alternaria cone disorder, gray mold or spider mite damage. Crop damage can increase with later harvests.

The cultural recommendations above apply to hops produced for conventional commercial markets and those grown under guidelines for organic production. Under the additional constraints imposed by organic production guidelines, particular attention must be paid to selecting disease-resistant varieties. This is the foundation upon which organic production will succeed or fail with respect to the major fungal diseases.

Organic producers should consider a combination of sulfur and oil-based fungicides.