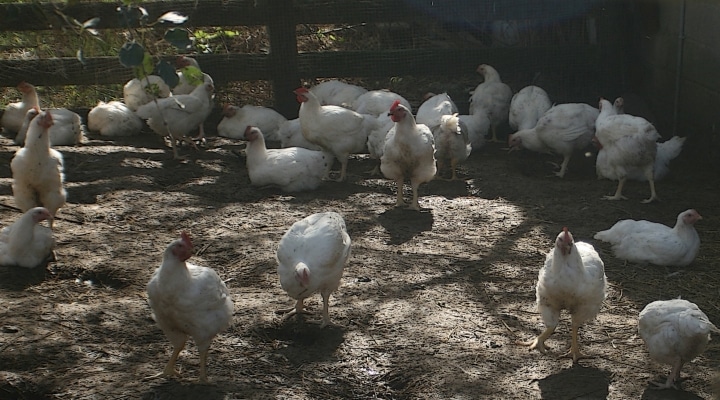 Faculty from Penn State’s Department of Animal Science will be part of a $10 million project led by researchers at the University of Connecticut College of Agriculture, Health and Natural Resources. The competitive award was announced this week by the United States Department of Agriculture National Institute of Food and Agriculture (USDA-NIFA) at a news conference attended by Connecticut Gov. Ned Lamont and UConn President Thomas Katsouleas. (photo by Bill Barber, Creative Commons/flickr.com)

UNIVERSITY PARK, Pa. — Faculty from Penn State’s Department of Animal Science will be part of a $10 million project led by researchers at the University of Connecticut College of Agriculture, Health and Natural Resources. The competitive award was announced this week by the United States Department of Agriculture National Institute of Food and Agriculture (USDA-NIFA) at a news conference attended by Connecticut Gov. Ned Lamont and UConn President Thomas Katsouleas.

Aimed at developing an integrated and sustainable program for enhancing the viability of antibiotic-restricted broiler production in the poultry industry, the project will be led by Kumar Venkitanarayanan, Associate Dean of Research and Graduate Education and Professor of Animal Science at UConn.

Dr. Terry Etherton, Head of the Department of Animal Science, said, “Being asked to contribute to this research project is a tribute to the high level of expertise in our poultry science faculty and a recognition of how important the poultry industry is to the Pennsylvania economy.

The United States produces the most broiler chickens world-wide, topping nine billion birds annually. To maintain such high rates of production, it has been standard to rely on antibiotics to prevent disease, with antimicrobials also promoting faster growth in the birds. However, with concerns surrounding the use of antibiotics, such as the spread of antibiotic resistance, the Food and Drug Administration (FDA) issued a directive to phase out antibiotic growth promoters (AGPs) in poultry production.

Venkitanarayanan explains that this poses challenges for the industry, because maintaining high production while restricting antibiotic use means bird health can be negatively impacted, production can decrease, and there are also environmental concerns due to higher feed consumption, leading to increased waste generation. Big changes need to happen to maintain production without the use of antibiotics.

“Poultry meat is projected to be a major source of protein for the increasing human population, which is projected to be 10 billion by 2050,” says Venkitanarayanan. “The broiler industry has been able to reach high levels of production through selective breeding and by using antibiotics as growth promoters. We are not sure how phasing out antibiotic growth promoters will affect the sustainability of the industry, especially to meet future demand for the increasing population.”

To address these concerns, Venkitanarayanan developed the project in hopes of creating a sustainable broiler production system by improving bird and human health and through addressing environmental concerns. To meet these goals, Venkitanarayanan assembled an interdisciplinary team of 30 researchers from 13 institutions. “We looked into each component – bird health, human health, and environmental impact of the industry — and we assembled the experts who can address issues in each of the three components,” says Venkitanarayanan. “It is a real collective effort.”

Boney will assist the Research Team by assessing the nutritional profile of alternate feed ingredients for poultry diets. More specifically, a cecectomized rooster model will be used to determine the metabolizable energy and true amino acid digestibility values of four insect meals. Better understanding how these feedstuffs affect poultry growth and development is an important step toward sustainable production.

Both Martin and Boney will contribute to the Extension and Outreach Team by administering a national survey to gain a better understanding of current broiler management techniques in various production systems. These data will be used to identify areas for improvement and development of a stakeholder targeted short course. This short course titled “Brooding management strategies to optimize health in antibiotic free poultry” will be offered to reinforce the fundamentals of poultry brooding. These efforts will help producers better manage flocks to improve overall animal health and performance.

Finally, Martin will assist the Welfare Team by studying animal behavior in both organic and antibiotic free operations during high ambient temperatures. Better understanding bird activity in these production settings may help to circumvent health and welfare issues.

“From a sustainability perspective, you have to have a focus on chickens and preventing diseases and promoting health. Bird welfare is a major concern. If birds are not healthy, the system will not be sustainable,” Venkitanarayanan says.

Flavonoids’ presence in sorghum roots may lead to frost-resistant crop