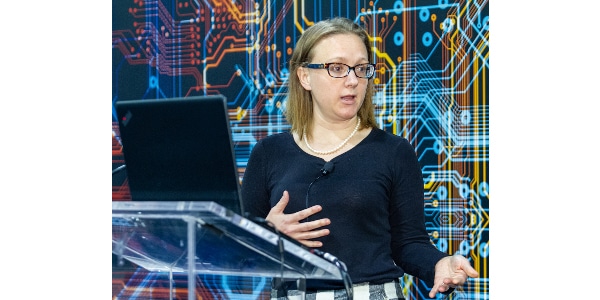 Jenny Houlroyd, with the Safety, Health and Environmental Services at Georgia Tech Enterprise Innovation Institute, and Dr. Mark Jackwood, with the Poultry Diagnostic and Research Center, Department of Population Health at the University of Georgia’s College of Veterinary Medicine, presenting research findings during their TECHTalk sessions at the 2020 IPPE. (Courtesy of USPOULTRY)

TUCKER, Ga. — During the 2020 International Production & Processing Expo (IPPE), six researchers presented their findings from recently completed research projects funded by the U.S. Poultry & Egg Association (USPOULTRY) and its Foundation as part of the TECHTalk sessions offered during the expo.

Jenny Houlroyd, with the Safety, Health and Environmental Services at Georgia Tech Enterprise Innovation Institute, presented research findings on “A Pilot Study of Exposures to Peracetic Acid-Based Disinfectants Among Poultry Processing Workers.” She described the research conducted using three different sensors and discussed the considerable variation and lack of precision between tested methods related to exposure of peracetic acid. Houlroyd stated, “Interpret the results with caution. Keep numbers regarding the time, location and distance from the sources, and listen to the symptoms of employees and inspectors.”

As part of his research findings on “Improved Methods for the Control of Variant Strains of Infectious Bronchitis Virus (IBV),” Dr. Mark Jackwood, with the Poultry Diagnostic and Research Center, Department of Population Health at the University of Georgia’s College of Veterinary Medicine, gave an overview of the virus with its characteristics and challenges. He mentioned that the virus is caused by a coronavirus that is highly contagious and attacks mainly upper respiratory organs and the reproductive systems with losses in production and misshapen or poor-quality eggs. “It takes around one year to attenuate one of this viruses, and five years for a vaccine to come to market,” said Jackwood.

Dr. Armitra Jackson-Davis, with the Department of Food and Animal Sciences at Alabama Agricultural and Mechanical University, provided information on a research study called, “Inactivation of Campylobacter jejuni In Vitro and on Artificially Inoculated Chicken Skin by Organic Acids Alone or Combined with Yucca Extract.” She discussed how they looked at ways to reduce contamination of chicken skin during processing. The research found that adding Yucca extract to organic acids significantly reduced the levels of Campylobacter on chicken skin compared to organic acids alone when used as an immersion treatment.

During his update on Blackhead research, Dr. Robert Beckstead, with the Prestage Department of Poultry Science at North Carolina State University, remarked that Blackhead disease is caused by Histomonas meleagridis and causes 100% mortality in turkeys and 30% in chickens. He mentioned that the signs of Blackhead disease include a hunched posture and sulfur colored droppings. Histomonas also causes ulcerations and inflammation of the ceca and necrosis of the liver. Beckstead remarked, “When turkeys get infected with the disease, they tend to flock together, and the disease is transmitted.”

All of the researchers’ presentations have been made available on USPOULTRY’s YouTube channel and can be viewed at www.youtube.com/USPOULTRY.

The importance of gardening during COVID-19 pandemic