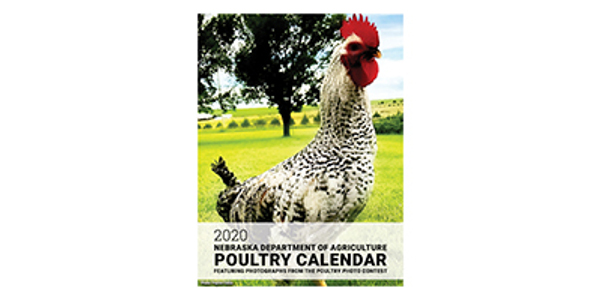 This year, the Nebraska Department of Agriculture (NDA) used the winning entries from the annual Poultry Photo Contest to make a calendar that is available online so it is more accessible. (Courtesy of NDA)

GRAND ISLAND — The Nebraska Department of Agriculture (NDA) announced the winners of its annual Poultry Photo Contest during a special celebration at the Nebraska State Fair in Grand Island. The contest was open to Nebraska 4-H and FFA members from around the state.

“NDA’s annual poultry photo contest is a great way to highlight the state’s diverse poultry populations, especially as the poultry industry in Nebraska continues to grow,” said NDA Director Steve Wellman. “We appreciate these talented 4-H and FFA members and the time they spent capturing the perfect photos for our contest. A big thank you to everyone who participated.”

NDA will use the winning photos online and in printed materials about the importance of biosecurity so backyard poultry owners have the information they need to keep their flocks healthy.

NDA’s poultry contest was funded through a grant from the USDA Animal and Plant Health Inspection Service, Veterinary Service.

The winning photographs can be viewed on the NDA website at www.nda.nebraska.gov/animal/avian

Aid for victims of late-summer floods