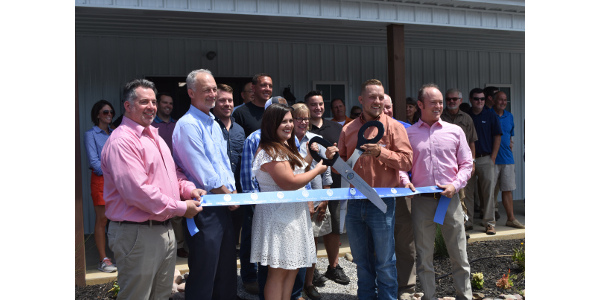 The Poultry Education Center at Hayden Farms opened its doors to a waiting public. (Courtesy of Farmstead Media)

(A version of this article appears in the August 2, 2018 edition of The Farmer’s Pride)

FRANKFORT, Ky. — When Ohio County farmer Daniel Hayden met his bride-to-be Danielle Beard at Oklahoma State University just over four years ago, Danielle had some negative views of the poultry industry. Having limited exposure to the business, her perception was shaped largely by myth and misinformation. Daniel had lived around poultry operations for most of his life, so he set about the task of reversing some of those notions and bringing Danielle home to Whitesville and having her see the real thing for herself completely changed her opinion of the industry.

The young couple realized that the best way to convince someone that poultry production is safe and humane when done properly was to show them, first hand. The idea came full circle in mid-July when the ribbon was snipped, and the Poultry Education Center at Hayden Farms opened its doors to a waiting public.

first tourA visit to the center starts at the project’s headquarters, a building containing offices and classroom/meeting room space where individuals and groups can be introduced to the techniques of modern chicken farming. The information is worthwhile, but what really brings the point across is a visit to the specially outfitted broiler house where visitors can see, up close, how well the birds are being treated.

Biosecurity has always been the limiting factor when it comes to allowing people to see things for themselves, according to Kentucky Poultry Federation Executive Director Jamie Guffey. At the Hayden’s facility, visitors enter a viewing room equipped with floor-to-ceiling windows that provide safe, controlled exposure to the birds. Personal contact is prohibited for the health and safety of the birds, but visitors can watch the birds do the four things that are necessary for a healthy chicken, according to specialists from Perdue Farms: eat, drink, rest and play. Perdue Farms contracts with the Haydens to produce the birds and partners with them in the education efforts.

family“We hope to provide accurate, observable information to consumers and decision makers about how these birds are grown and the care and attention they receive,” Daniel says. He notes that, often, decisions are made that impact the industry on the state and national level, based solely on anecdotal evidence that may not provide accurate information on the attention to animal welfare that is paid by most poultry producers. “We’d like to give them the opportunity to see for themselves,” he said.

DSC_9439“This is a historic effort, and we’re pleased to be a part of it,” Said Warren Beeler, executive director of the Governor’s Office on Agriculture Policy, which provided some of the funding for the venture. They join the Kentucky Soybean Board and the Kentucky Corn Growers, along with several other agriculture and commodity groups in partnering with the Haydens to make their dream a reality.

“I just think it’s an amazing investment,” Beeler continued. “I hope it’s contagious and it moves over into other segments of agriculture, so the public can really understand that we’re doing it better than we’ve ever done it, we learn something every day and we’re just going to get better and better.”

At 80, Caverndale Farms poised for future