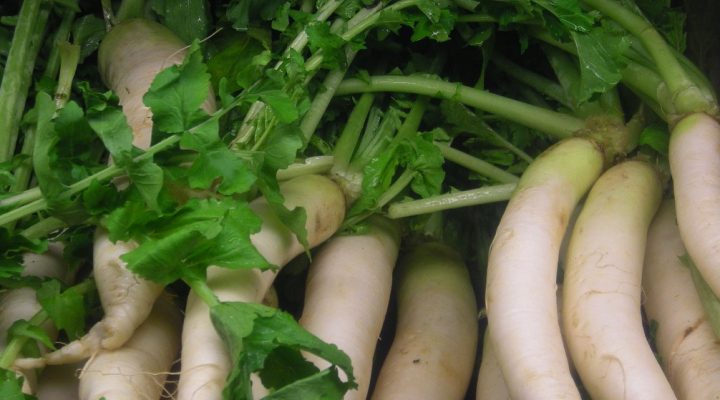 GAINESVILLE, Fla. — Asian-Americans in three East Coast states, including Florida, yearn for more of their native vegetables, and those crops can be grown in the East, say two University of Florida Institute of Food and Agricultural Sciences researchers.

Gene McAvoy, a UF/IFAS Extension vegetable specialist, and Shouan Zhang, a UF/IFAS plant pathology associate professor, were among a group of 17 researchers from four land-grant universities who surveyed Asian Americans’ preferences in Asian vegetables. Then the researchers tested the crops in various states to see how well they would grow.

Asians buy 2 ½ to 3 times as many vegetables as Caucasians, said McAvoy, so it’s only natural that researchers find out the most popular for Asian-Americans and see if they can grow them. Additionally, the rapid expansion of Asian populations in the United States provides significant opportunities and challenges for the produce sector to take advantage of their close proximity to densely populated areas, Zhang said.

“Growers are always looking for new vegetables,” said McAvoy, who’s also director of UF/IFAS Extension Hendry County. “They want to get out in front of the competition. It’s been lucrative. Some medium-sized growers – that’s how they’ve been able to survive and even thrive.”

The study into the popularity and feasibility of certain Asian vegetables was led by Rutgers University and included researchers from UF/IFAS, the University of Massachusetts and Pennsylvania State University. Researchers conducted phone interviews with 685 Asian-Americans in Florida, New Jersey, Massachusetts and Pennsylvania. They asked how much consumers spent on vegetable and herbs.

Then they used consumer choices to test 28 cultivars at university plots in Florida, New Jersey and Massachusetts. That way, they hope to help growers focus on the best crops.

The initial field data show many of these ethnic crops can be grown in the eastern U.S. and are nutrient-rich to help drive consumer demand, the study showed.

Ramu Govindasamy, professor and chair of the Rutgers University department of agricultural, food and resource economics, led the investigation.

McAvoy and Zhang, a faculty member at the UF/IFAS Tropical Research and Education Center in Homestead, Florida helped conduct the study, published in the journal HortScience.

Although the study primarily examined the importance of Asian vegetables to Asian Americans in Florida and the eastern U.S., researchers also visited Asian grocery stores, farmers’ markets and chain supermarkets to investigate the major types of Asian vegetables, the prices and sales values of each Asian vegetable.

Researchers found other ethnic groups such as white Americans and Latin Americans buying and consuming plenty of Asian vegetables, Zhang said. They don’t know how much those groups are spending on Asian vegetables.

“However, we believe they will continue growing in the future with increasing populations,” he said.