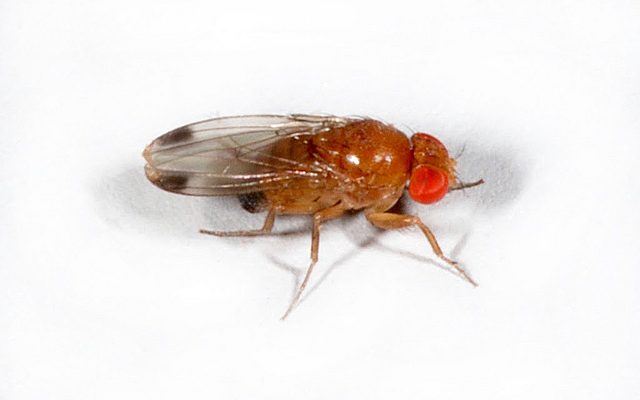 Many growers have asked if spotted wing Drosophila (SWD) infest fruit that has dropped to the ground. (Oregon State University via Flickr)

In 2016, we collected tart cherries from the ground that had dropped as a result of June drop. We collected three sizes of fruit: less than 11 millimeters, 11-13 millimeters and 13-17 millimeters. We placed 10 fruits into plastic bioassay containers and exposed the fruit to five male and five female flies. We replicated the experiment five times for each size of tart cherry fruit. Flies remained in the bioassay containers for 14 days. We counted the number of adult flies after this time period, and we found no new adult flies.

These results indicate the various sizes of June-dropped tart cherries were not a suitable host for SWD at these sizes. Female flies may have been able to lay eggs in the fruit in the bioassay containers, but the SWD were not able to survive on these June drop fruit No new flies were reared out of tart cherry June drops in 2016.

At grower requests, we repeated this study in tart and sweet cherries in 2017. Growers observed that this year’s June-dropped fruit seemed “fleshier” than in past years. We collected sweet cherries, tart cherries and cracked sweet cherries from the ground at the Northwest Michigan Horticultural Research Center. Fruit were weighed and we also tested fruit for firmness.

We placed 10 fruit into bioassay containers and replicated each treatment four times. We placed five male and female SWD into the containers. Flies were removed after 24 hours. We counted eggs after two days and counted the number of larvae after seven days.

The difference in SWD infestation between the fruits was significant (Figure 1). We found that SWD females were able to lay a few eggs in relatively green June-dropped tarts, but no larvae survived on these fruits. They were able to lay more eggs in the intact sweet cherries (average 13.75 eggs). Some larvae were found in these fruits (an average of 9.75 larvae), but the greatest number of larvae were found in cracked sweet cherries collected from the ground (average of 48.5 larvae).

Our recording of fewer eggs (34.5) than larvae in the cracked sweets is likely a result of human error counting small SWD eggs on individual fruits under a microscope. We conclude that SWD will not readily lay eggs or survive to adulthood on intact June-dropped fruit. However, SWD do lay eggs and survive on damaged fruits that drop to the ground. At this time, June-dropped fruit do not seem to be greatly contributing to increasing in-orchard populations unless there is physical damage to the fruit.

In southwest Michigan, there are a substantial number of riper tart cherries (not June drops) that have been physically removed from the trees by wind. To determine if they could be infested by SWD, we collected 10 wind-dropped fruit from the ground in each of 10 rows into the orchard. Fruit were intact and placed the fruit onto wire mesh in three emergence containers; a sponge was added for moisture. We counted the number of male and female adult flies at five days and seven days after the fruit were collected and placed into the emergence containers.

In one orchard, no SWD were reared out of wind-dropped tart cherries (Table 1). However, at the four other orchards, we found male and female flies. The number of SWD varied between the orchards, but the wind-dropped fruit were definitely suitable hosts for SWD.

We conclude that wind-dropped cherries are adequate hosts that can support a generation of SWD and these fruits will likely contribute to the overall population within tart cherry orchards unlike June-dropped fruit that cannot sustain SWD at that stage of development.

Michigan State University Extension recommends growers maintain tight programs for SWD, particularly in the northwest and west central regions where we have had so much rainfall. There are also concerns of SWD in southwest Michigan where tart cherry harvest has just begun and SWD populations are rising quickly. Adults were captured earlier in the season than in past years, populations appear to be building fast and we have detected larvae in cherries in orchards where we are conducting research.

As in past years, we have shown that even the best spray programs cannot prevent infestations when SWD populations are high. Growers should use materials that are rated excellent against SWD. We are still waiting on the official word from the Environmental Protection Agency on the reduced pre-harvest interval for Mustang Maxx in tart cherries—we will be sure to update growers with information as soon as we have it.