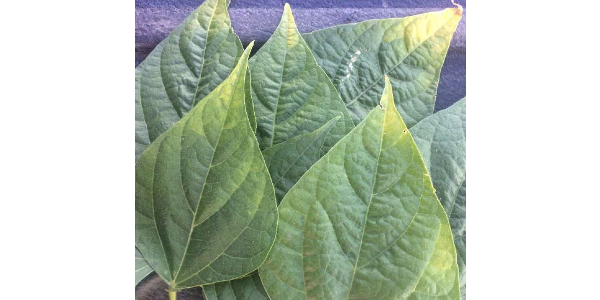 EAST LANSING, Mich. — There are a lot of caterpillars in soybean this year, including silver spotted skipper, thistle caterpillar and loopers. It takes a lot of defoliation, however, to harm soybeans. I had an odd call about large numbers of tiny but ravenous grasshoppers eating a pasture—indeed, I have noticed a surprising number of grasshopper nymphs everywhere I go, but nothing sprayable. The numbers are dropping as they get eaten by other critters. They seem like a good meal for birds and insects.

A bunch of information on potato leafhopper

Potato leafhopper is widespread and noticeable this year in field crops. I’ve had multiple phone calls about this pest, and Michigan State University Extension forage specialist Kim Cassida says, “There are more leafhoppers this year than any time since I have been here.” Around the campus and in the garden, I’ve also seen signs of potato leafhopper feeding on vegetables, ornamentals and trees.

Why is potato leafhopper so bad this year? Weather patterns early in the spring were ideal for carrying this pest north, and that pattern persisted over several weeks. Potato leafhopper migration potentially was larger and longer than in previous springs. Below, I summarize everything I know about potato leafhopper in one giant article for you to read now or save as a reference.

Since potato leafhopper doesn’t survive the winter in Michigan, it has to colonize the state each year from the south. Overwintering occurs from the Gulf coast across the southeastern U.S.; southern yellow pine is an important overwintering host. A study published in 2005 extended the potential overwintering range further north into Missouri, Kentucky, Virginia and Maryland (although overwintering this far north would depend on severity of the winter). In spring, leafhoppers migrate from south to north. The ideal weather conditions involve winds out of the south and a temperature of 50 degrees Fahrenheit along the flight path.

A study in the 1990s, combining meteorological data and field sampling, estimated that it took only 24 to 36 hours of continuous flight, or two to three shorter night-flights, for potato leafhopper to move from Texas, Oklahoma and Louisiana to central Michigan. Most of the migrants are mated females, according to my colleague Elson Shields from Cornell (who worked on potato leafhopper movement for many years). He says the insects are pulled into a storm front and moved with it until they “get wet and cold, fold their wings and tumble out” of the storm. As a result, large numbers of potato leafhoppers can arrive suddenly and all at once. Since potato leafhopper has over 200 host plants, insects can always find something to feed on once they get here. The migrants colonize fields in May and June, as mated females insert their eggs into plant stems.

Leafhoppers feed by sucking sap out of plants, injecting saliva as they feed. Most leafhopper species do not cause noticeable injury as they feed, but potato leafhopper is different. The enzymes in its saliva interact with the plant, resulting in abnormal cell growth and blockage of water and nutrient movement in leaves. The visual symptom in most plants is a characteristic yellowing—hopperburn—which starts at the leaf tip and margins, plus stunting of the overall plant. In sensitive hosts, or under high feeding pressure, leaves curl up or even dry up and die. Both nymphs (immatures) and adults cause this type of injury when they feed. The impact of potato leafhopper feeding is generally exacerbated under drought conditions.

In contrast to pests like soybean aphid, predators and parasitoid wasps play a minor role in reducing potato leafhopper populations. There are many predators that will eat potato leafhopper if they can catch them, but not enough to make a difference in a high pressure year. However, there is a naturally occurring entomopathogenic (insect-killing) fungus that rapidly kills potato leafhopper in some years under favorable warm, humid weather conditions in August.

Host plant resistance: Potato leafhopper-resistant alfalfa has been available for about 20 years. The first varieties were not particularly effective, but newer releases are much improved. These are sold under different trade names by different companies, sometimes as “no-spray” varieties. The mechanism of resistance is partially physical based on glandular hairs on the stems that reduce potato leafhopper movement, feeding and reproduction. Unlike a hybrid crop (like corn) where every plant is genetically similar, alfalfa is cross-pollinated and each plant is slightly different. That means the individual plants in a potato leafhopper-variety also differ in resistance. In seed company terms, a “highly-resistant” potato leafhopper variety is defined as having 51% or more resistant plants. Many new potato leafhopper-resistant varieties well-exceed this level, with as high as 85% resistant plants. However, a portion of the plants in the field are still susceptible to potato leafhopper injury. In an average year, a resistant field will not need to be sprayed, but in a high pressure year, even no-spray varieties may need a little help from an insecticide. Another wrinkle is that even if a resistant field doesn’t show hopperburn, some varieties still show a benefit when an insecticide is applied.

Mixed stands: Alfalfa in an alfalfa/grass stand can suffer less damage compared to alfalfa alone. The grass portion of the mix is not fed on by potato leafhopper, and the non-host may hide or make it harder for potato leafhopper to find the alfalfa. However, depending on the end use, a mixed stand may not be practical or feasible, and under high pressure, mixed stands still go over threshold.

Harvest: Cutting is the preferred management tactic if the field is ready to harvest. Cutting kills potato leafhopper eggs and many nymphs; the lower the cut, the better for population reduction. Cutting is the best option for yellowing alfalfa because damage and quality has already happened, and the cost of spraying is best spent on the new growth, if needed. Cutting becomes the only option once insecticide preharvest intervals are reached.

Sampling and thresholds in alfalfa

Sampling by 15-inch sweep net is relatively easy. The recommendation is to take a total of 100 sweeps, divided into sets of 10 or 20; avoid sampling field edges, since potato leafhopper numbers may be higher there. Taking multiple, smaller sets of sweeps distributes the sampling pattern across the field and makes it easier to sort the potato leafhopper among the other insects in the net. A small hand-held tally counter makes it easier to keep a running total of the count.

At threshold, the preferred tactic is cutting if the field is ready. Cutting alone may be enough, but if not, then spraying regrowth is better in terms of spray coverage. A decision to spray is based on a combination of potato leafhopper number and estimated plant height (your sweep net handle can be marked to double as a measuring stick) as follows:

For potato leafhopper-resistant varieties, thresholds range from three to 10 times higher, depending on the seed company. Consult the tech sheet for those varieties or contact the company directly for their specific recommendation.

Sampling and thresholds in dry beans

Numbers can increase dramatically, especially in dry weather or when nearby alfalfa fields are cut. In newly emerged unifoliate stage beans that were not planted with neonicotinoid-treated seed, examine 100 individual plants for potato leafhopper. The threshold for unifoliate beans is 0.5 potato leafhopper per plant (50 potato leafhopper total in a 100-plant sample). Seed treatments wear out within a month after planting, so all fields should be scouted by mid-season.

Many products do a fair job of killing potato leafhopper, so cost and availability are more important than obsessing about a specific product. (An exception is organic production, which has few options. Pyganic, or pyrethrum, provides decent short-term control of potato leafhopper adults and nymphs in alfalfa and beans, but the residual is very short and frequent applications may be necessary.) The most important thing is to scout regularly and use thresholds to determine the need to spray rather than waiting for hopperburn to appear. At that point, some yield or quality loss has already occurred.

Insecticides begin to break down immediately on plants, but some insecticides last longer than others. For example, many pyrethroids last at least 14 days. All insecticides break down faster under hot, sunny conditions (over 90 F), which tend to be the same conditions that cause water stress in plants and exacerbate potato leafhopper damage. Something to remember is that potato leafhopper eggs are inside the plant stem. New nymphs can survive if insecticide residue has dissipated by the time they emerge.

Another thing to consider is that adults can re-infest harvested or sprayed fields from outside sources. Potato leafhoppers feed on dozens of common plants, including many weeds, other crops such potato and soybean, ornamentals and trees, so there is always a source of potato leafhopper nearby.

Most insecticides commonly used on alfalfa come with a honey bee/pollinator warning on the label, for example, “This pesticide is extremely toxic to bees…do not apply this product or let it drift to blooming crops” or “Avoid application when bees are actively foraging.” The bottom line is that if the crop is blooming, harvest and treat the regrowth to avoid harming bees.

Chestnut farm tour to be held in Owosso on Sept. 7

Fall armyworms on the march across Texas
July 21, 2021