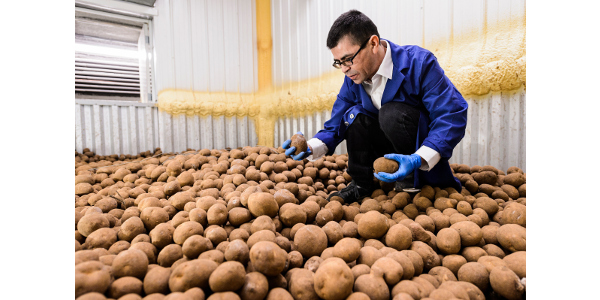 U.S. potato exports for the July – September quarter were down significantly compared to the same period in 2019. This drop is a result of the pandemic’s continuing impact on the demand in many markets. (Jeff Miller/UW-Madison)

DENVER, Colo. — U.S. potato exports for the July – September quarter were down significantly compared to the same period in 2019. This drop is a result of the pandemic’s continuing impact on the demand in many markets, particularly in SE Asia and Central America and the tight supplies of U.S. frozen potato products. Additionally, exports for this period in 2019 were at record levels, so the bar was set very high.

Frozen exports were down 23% in volume; however, they were down only 14% in September, showing recoveries in some markets. Frozen exports to Mexico are still well above 2019 when the retaliatory tariff caused switches to Canadian and EU products. The least impacted markets are Korea, up 2%, Taiwan, down 6%, and Japan, down 12%. The biggest impacts were in China, down 62%, Indonesia, down 71%, the Philippines, down 67%, and Vietnam, down 69%.

Dehydrated exports were down only 2% for the quarter and 5% for September. This reduction is more reflective of tight U.S. supplies than decreased demand. Some very positive results were recorded for Japan, up 19%, Korea, up 71%, Taiwan, up 16%, and Saudi Arabia, up 137%.

Exports of fresh potatoes, including table-stock and chipping, were down 6% for the quarter but up 10% in September. The decline is largely caused by a 16% drop to Canada as the movement of raw potatoes for frozen processing was curtailed. Exports to target markets in Asia, Central America, and Mexico were either up or even with last year. Of note, the new year-round access to Japan resulted in a 306% increase, while the Philippines was up 30%, and Taiwan up 42%. Exports to Mexico held steady and were up 3% in September despite the significant negative impacts of the virus on this country.

'Farms, Food, and You' vermicomposting