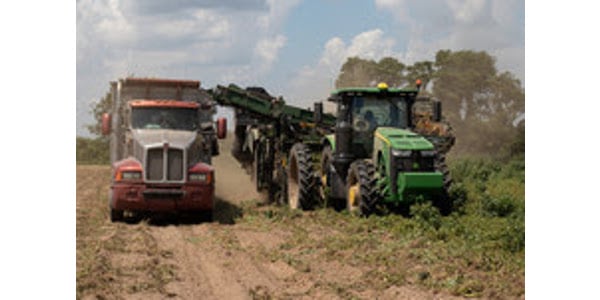 Jim Browning, a first generation potato farmer, manages Black Gold Farms, which provides potatoes that will soon be made into bags of chips. (Courtesy of Missouri Department of Agriculture)

JEFFERSON CITY, Mo. — 3 days. That’s all it takes for a potato to reach the grocery store shelf from a field in Charleston, Missouri. Jim Browning, a first generation potato farmer, manages Black Gold Farms, which provides potatoes that will soon be made into bags of chips.

“This time of year, we are ramped up providing potatoes for the Fourth of July holiday,” said Browning. “We’re very proud of the fact that if your family enjoys potato chips on the Fourth of July, there’s a really good chance that chip came from a potato that we raised right here on our farm.”

Beginning with a small 10-acre plot of potatoes planted in the fertile soil of North Dakota’s Red River Valley more than 80 years ago, Black Gold Farms has evolved into a global company.

In 1986, Black Gold Farms planted its first potato crop in Charleston, Missouri, after choosing the city to be the location of the Halverson family’s first “distance farm.” By breaking ground at the new farm, Black Gold Farms has been able to get their potatoes to customers more quickly than ever. By expanding into Missouri, the farm became the largest potato grower in the Show-Me state overnight.

“Black Gold Farms is the single largest supplier of potatoes to the largest snack food company in the world,” said Browning. “I’m proud to be a part of that.”

After being born and raised in southeast Missouri and working on a watermelon farm for years, Browning appreciates the farming powerhouse the Bootheel region has developed into. Potatoes is just one of many specialty crops raised in the area.

“There’s a lot of jobs where you can’t see the end result,” said Browning. “Here we get to see that. When you can take a seed piece, put it in the ground and grow it to see what it ends up like on the grocery store shelf, that’s pretty rewarding.”

For Browning, it’s all about three things: sustainability, quality control and customer satisfaction. He utilizes new generation technology like field sensor technology and data analysis to focus in on agriculture stewardship.

“As potato farmers, we get to nurture and prepare the ground, and provide the crop what it needs as its growing,” said Browning. “We then get to bring the crop to our plant, wash it and truck it away to be made into potato chips.”

A perfect seed size is a halved potato weighing 2.2 oz. Each potato seed can yield between 8-10 potatoes for customers to enjoy. At Black Gold Farms, Browning’s goal is to ship out an impressive 1,000 loads of potatoes each season.

“I really enjoy growing potatoes for the enjoyment it brings our customers,” said Browning. “The end result is why I do what I do.”

This piece may be used as an editorial or feature story by members of the media. For high-resolution photos to print in your local newspaper or agriculture publication, click here. To view the full length video of
Jim Browning, click here.

To nominate a farmer today to be featured as a part of Farm for Life and see a partial list of upcoming videos, please visit Agriculture.Mo.Gov/farmforlife.