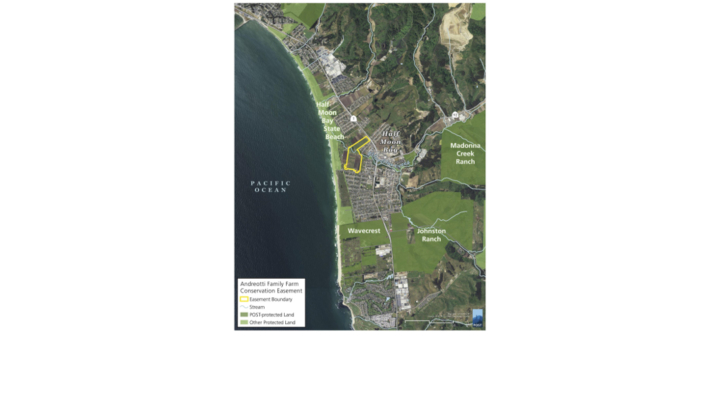 The property, which has been farmed by the family since 1926, is situated in the heart of Half Moon Bay, between downtown and Francis Beach. (Courtesy Photo)

The property, which has been farmed by the family since 1926, is situated in the heart of Half Moon Bay, between downtown and Francis Beach. The farm is well known within the Half Moon Bay community and by those who frequent its historic farm stand on Kelly Avenue, the seasonal pumpkin stand on Highway 1, the driving range and the popular beach nearby. 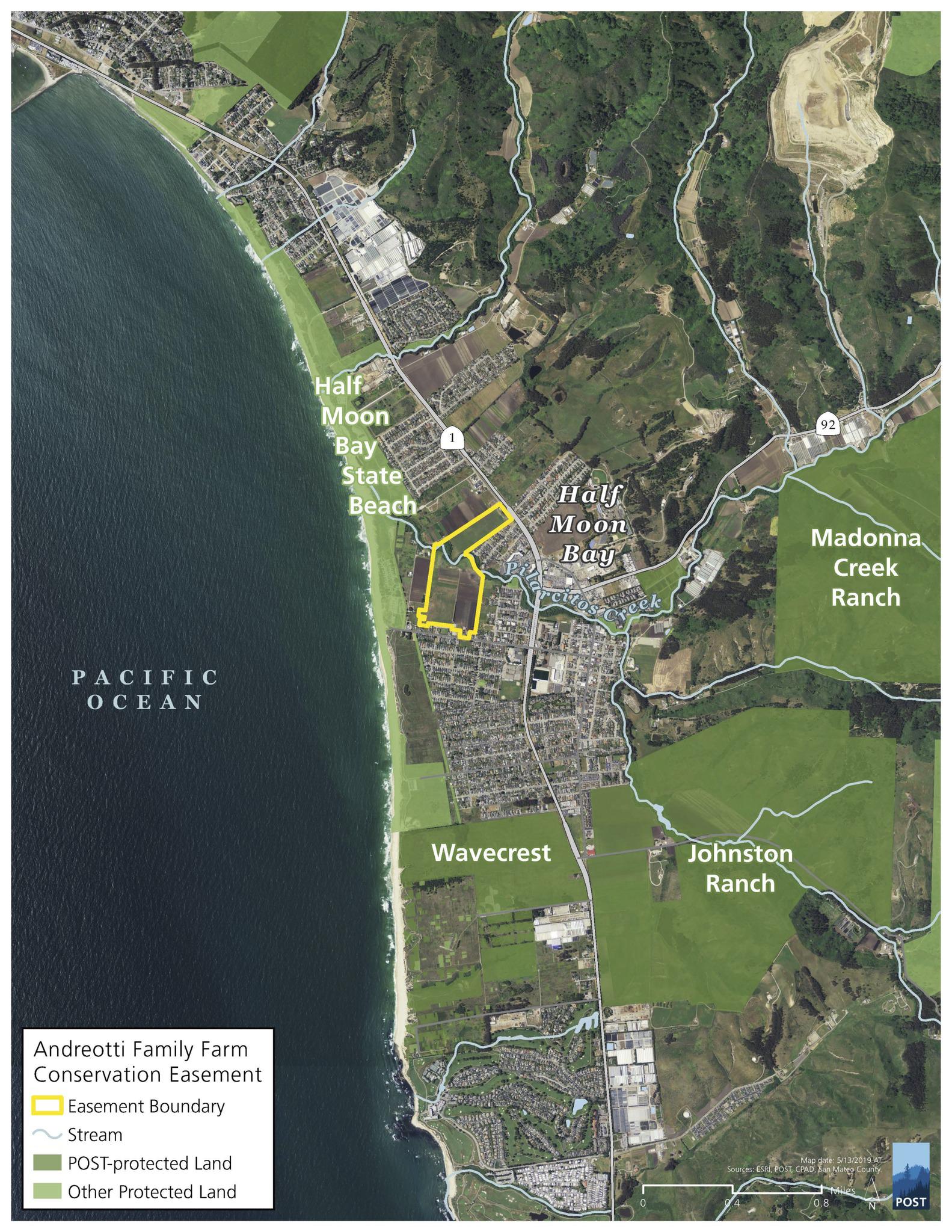 Over the past three years, POST has worked with the Andreottis to ensure a future for their family farm. In 2017, POST purchased some of the acreage of the original farm that was for sale on the open market and worked with Dino and Terry Andreotti throughout this time to reassemble and preserve the farm parcels with an agricultural conservation easement. POST also coordinated with Aptos-based FarmLink to procure the financing that the Andreottis needed to reunite the property established by their grandparents.

“Even though we are experiencing a strong economy, financing for farmland, operations and equipment is notoriously difficult to come by and requires an extraordinary amount of creativity,” said Brett Melone, director of lending at FarmLink. “We value partnerships and strategies that support farm families who choose to protect their farms. The Andreottis’ situation was the perfect opportunity for our new program to support the viability of a protected family farm. We wish them much success.”

The entire Andreotti Family Farm is now subject to the affirmative agricultural easement that guarantees agricultural use in perpetuity. The protection ensures that this cornerstone of the Half Moon Bay community remains a farm.

“This farm is a Half Moon Bay institution that was narrowly saved from the auction block,” said Ben Wright, Farmland program manager for POST. “Instead, we have an outcome that illustrates the power of creative partnerships: two local non-profit organizations and longtime dedicated farmers coming together to preserve the agricultural heritage and economic viability of farming on the Coast. This is exactly what POST’s Farmland Futures Initiative was created to do.”

POST has been working to ensure the longevity of local farms on the San Mateo Coast since the 1980s. This agreement is part of POST’s Farmland Future Initiative (FFI), which works to reverse the trend of disappearing farmland on the San Mateo Coast through a combination of land acquisition, legal land protection and strategic investments in infrastructure. Driven by the belief that sustainable and environmentally responsible farming is good for the land and contributes to the vitality of local communities, POST works with farmland owners and operators to secure farmland and their associated natural resources. Since 2015, FFI has focused on the San Mateo Coast and has protected seven farms totaling 669 acres and initiated restoration of six additional protected farms along with a variety of farm infrastructure improvements across the area.

About the Peninsula Open Space Trust

POST protects open space on the Peninsula and in the South Bay for the benefit of all. As a private nonprofit land trust, POST has been responsible for saving more than 77,000 acres over the last 42 years. POST works with private landowners and public agencies to create a network of protected lands so that present and future generations may benefit from the careful balance of rural and urban landscapes that makes our region extraordinary. Visit openspacetrust.org for more information.

The mission of California FarmLink is to link independent farmers and ranchers with the land and financing they need for a sustainable future. FarmLink helps farmers to build strong business skills, access fair financing, and establish secure land tenure. Established in 1999, FarmLink supports beginning, limited-resource, immigrant and other underserved farmers across the state, with particular focus on the Central Coast, Central Valley, and North Coast regions. California FarmLink was certified as a Community Development Financial Institution (CDFI) in 2013. It is one of the first agricultural CDFIs in the nation focused on sustainable and organic agriculture, and economic and environmental resilience. Visit californiafarmlink.org for more information.

The Andreottis’ farm is a family operation that has worked its land for three generations. In 1926, Dino Andreotti and Julia Benedetti started the farm, producing primarily artichokes, beans and broccoli. They were among the first farms to join in the Farmer’s Market movement in 1943, selling at the Alemany Market in San Francisco. Their son Dino and his wife Terry took over in the 1970s. Now the farm is over 90 years old, starting on its fourth generation, and it produces just about every winter vegetable imaginable. The farm’s historical barn farm stand is open year-round, and its seasonal pumpkin patch is highly popular. More information at andreottifamilyfarms.com.

‘This is about farmers helping farmers’
September 26, 2021