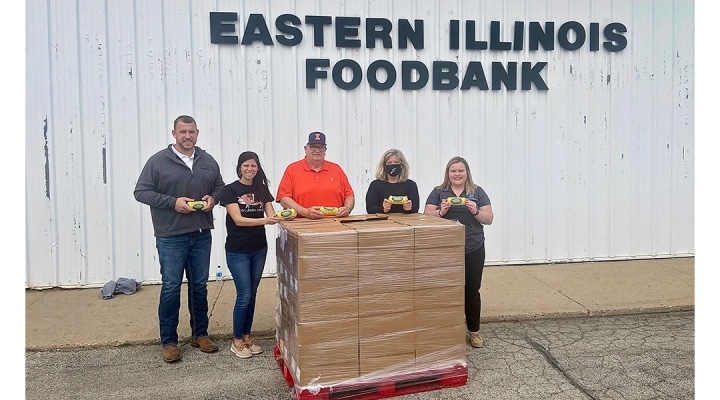 SPRINGFIELD, Ill. — Everyday food banks provide access to healthy and nutritious food to keep families across Illinois from going to bed hungry. As part of the Pork Power: Partnering to Fight Hunger in Illinois campaign, the Illinois Pork Producers Association (IPPA), along with the Illinois Corn Marketing Board (ICMB) and the Illinois Soybean Association (ISA) Checkoff Program donated a total of 4,100 pounds of ground pork to Eastern Illinois Foodbank to contribute to the effort.

In partnership with the University of Illinois athletic department, IPPA committed to donating 50 pounds of ground pork to Eastern Illinois Foodbank when the men’s basketball team, reached 50 points during their game. The 2021 Fighting Illini men’s basketball team fought their way through 31 games during their season and for a total of 1,550 pounds donated on behalf of this partnership.

“We are always pleased to partner with other farmer groups and give back to our state-wide community,” said Roger Sy, former ICMB Chair. “It is especially fun this year following a successful Illini men’s basketball season and seeing all the positive change being made with these pork donations.”

In addition to the university partnership, IPPA teamed up with neighboring state pork associations for a friendly competition during the men’s basketball season. The state whose team lost would donate $1,000 worth of ground pork to the winning state’s food bank of choice. As a result, $5,000 worth of ground pork, approximately 2,550 pounds, was also donated to Eastern Illinois Foodbank.

“I was pleased to attend the Pork Power Donation day at Eastern Illinois Food Bank on behalf of the Illinois Soybean Association,” said Josh, ISA director. “By donating over 4,000 pounds of ground pork, the Illinois Pork Producers Association is taking tremendous strides to fight the hunger crisis here in Illinois and ISA is proud to be a part of that partnership.”

The USDA recommends meat protein as part of a well-balanced and nutritious diet, yet it is often difficult for food banks to maintain an adequate supply. The Pork Power partners are committed to making meat protein available to those most in need.

If you are interested in helping IPPA and producers across the state fight food insecurity, visit

ilpork.com. For every $20 donation you are helping provide 20 servings of ground pork and you will receive a t-shirt as a thank you for your donation.