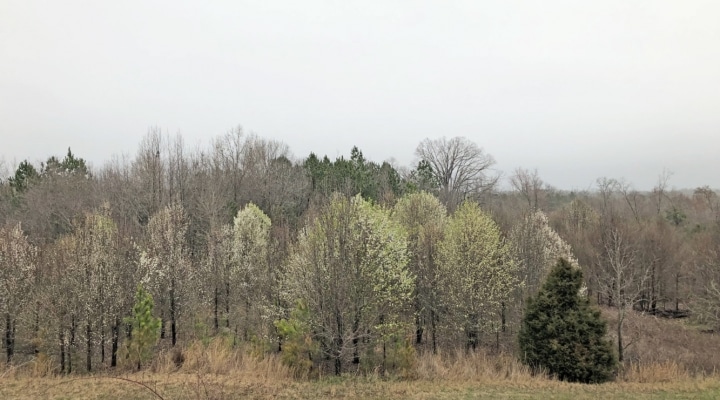 Some trees naturally live longer than others but, ironically, many of the most popular landscape trees tend to be relatively short-lived. Although their flowers are quite attractive, Bradford or Callery pears are generally considered short-lived trees, and they are also highly invasive(photo Clemson University)

CARTERVILLE, Ga. — Some trees naturally live longer than others but, ironically, many of the most popular landscape trees tend to be relatively short-lived. Although their flowers are quite attractive, Bradford or Callery pears are generally considered short-lived trees, and they are also highly invasive. As a group, these flowering pears tend to have a very weak, vertical branching structure that is notorious for splitting and breaking. On average, Bradford pear trees live around 10 to 15 years, 20 with luck, and will literally begin to self-destruct when storm winds blow through.

Most of the popular cultivars of Japanese flowering cherry trees (Kwanzan and Yoshino types) are also short-lived. They are grafted, which means the upper part (scion) of the tree is grown on the root system (rootstock) of a related tree. This process allows growers to replicate (clone) unique traits such as certain flower colors, weeping branches or larger flowers. These traits would not be expressed consistently if these trees were grown from seed.

This same process is used in many fruit cultivars. For example, every ‘Red Delicious’ apple you buy at the store is identical because of propagation by grafting or budding. Clones or cultivars within a species can usually be grafted or budded interchangeably. For example, Bradford pear can be grafted or budded onto Callery pear rootstock and vice-versa. As a novelty, you can even graft several apple cultivars onto the same tree.

It’s interesting to note that these cloned horticultural traits are often at odds with other traits in the same plants that tend to make them less vigorous or have weaker root systems. Some cultivars may be very difficult to root directly from cuttings. Grafting is a way to increase productivity and vigor by using a different rootstock.

However, the grafting process isn’t perfect, and it often creates incompatibility issues with the rootstock — kind of like a human rejecting an organ transplant.

Although grafting is intended to overcome inferior root traits, grafted trees tend to be shorter-lived due to weak graft attachments or increased susceptibility to insects and disease. The cloned portion is often weaker. In fact, the rootstocks on grafted trees often outlive the upper scion. In some situations, root suckers may try to grow below the graft union on dying trees or after the upper scion is dead.

Certain flowering cherry cultivars that have weeping branches will often be grafted to a standard scion and/or rootstock. In some situations, you will find the weeping scion branches start to die back or be replaced by suckers from the lower scion/rootstock that have a normal growth habit. Basically, it looks as though a completely different tree is growing from the top of the grafted tree. This is another example of how the rootstock is often more vigorous, and can even dominate, the weaker scion in some cultivars.

Don’t expect the Bradford pear or flowering cherry that you planted in your yard to outlive an oak tree. In most cases, these ornamental trees should be used sparingly, intended only as a temporary specimen that will likely start to decline or die around 20 years old.

If you’re looking to replace your Bradford pears or flowering cherry trees with a longer-lived alternative, it may be difficult to find a comparable tree with the same level of flower power.

If you prefer a native, white-flowering tree that blooms in early spring, consider planting a serviceberry or white redbud. Native trees that bloom later in the spring include white fringetree, Carolina silverbell and American yellowwood. Non-native white-flowering trees that are well-suited to Georgia include Kousa dogwood, star magnolia and Chinese fringetree. To add more interest and biodiversity to your landscape, consider planting more than just one type of tree.

For more information on native trees and shrubs in Georgia, visit extension.uga.edu/publications.

For help identifying a serviceberry plant, check out the following video from Union County University of Georgia Cooperative Extension.

UGA and Auburn compete for number of donations