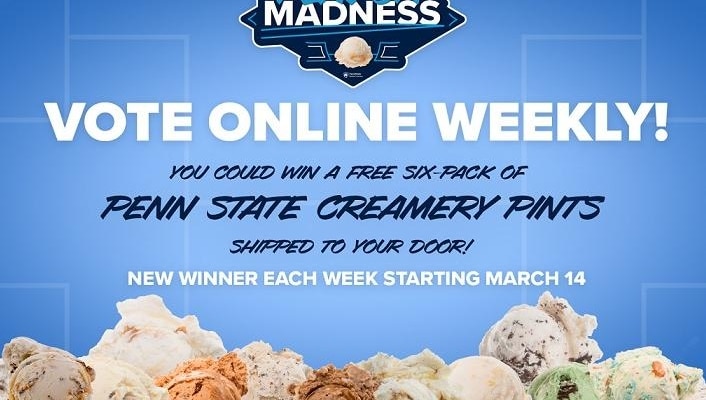 A sweet spring tradition, Penn State Berkey Creamery’s Flavor Madness competition, has returned to Happy Valley for its fifth year. The contest will tip off March 14 with the Creamery Sweet 16 taking the court. (photo by Penn State University)

UNIVERSITY PARK, Pa. — A sweet spring tradition, Penn State Berkey Creamery’s Flavor Madness competition, has returned to Happy Valley for its fifth year. The contest will tip off March 14 with the Creamery Sweet 16 taking the court.

Flavor Madness is an online tournament that allows ice cream fans to vote each week for their favorite Berkey Creamery ice cream flavors. Death By Chocolate has been the champion for the past four years and is favored to sweep the competition again.

The contest includes the “Classic” teams on one side of the bracket and “Specialties” teams on the other. The “Classics” roster includes Death by Chocolate, Peachy Paterno, Grilled Stickies, Cookies and Cream, Bittersweet Mint, Peanut Butter Swirl, Chocolate Chip Cookie Dough, and Monkey Business.

On the opposite side, the “Specialties” teams include a lineup of all-stars such as BJC Jams, Alumni Swirl, Smeal Business Bash, Scholar’s Chip, PA Pink Zone Strawberry, WPSU Coffee Break, Palmer Mousseum with Almonds, and THON Gold Ribbon Ripple.

Although the “Classics” flavor teams may have the advantage, the “Specialties” teams have a lot of support from their groups of fans.

“The creamery’s Flavor Madness contest has become a hit beyond our wildest imagination,” said Jim Brown, creamery sales and marketing manager. “Each year, our participants increase and get excited to cheer their favorite flavor on to victory.”

Brown also said that this year’s competition should be especially interesting, as Death by Chocolate and Bittersweet Mint are on the same side of the bracket, meaning they cannot meet in the championship final, as they have in the past.

The Flavor Madness voting schedule is as follows:

Online orders of the winning flavor will be discounted by $1 per half-gallon April 11-15. No in-store discounts will be offered.

Another perk — participants in the Flavor Madness contest will be entered in a drawing for a free six-pack pint shipment of creamery ice cream (within the 48 continental U.S. states), with a new winner chosen every week. Winners will be selected at random from the pool of each week’s players with a valid email address.

Participants must re-enter each week to be eligible for that week’s prize. Winners will be contacted by email and must respond within seven business days to claim their prize.

For complete contest rules or to download a flavor bracket, go to http://creamery.psu.edu/flavor-madness.