Home / National / Pollens to fit a honeybee’s every season
A new user experience is coming! We'll be asking you to login to your Morning Ag Clips account March 1st to access these new features.
We can't wait to share them with you! Read more here. 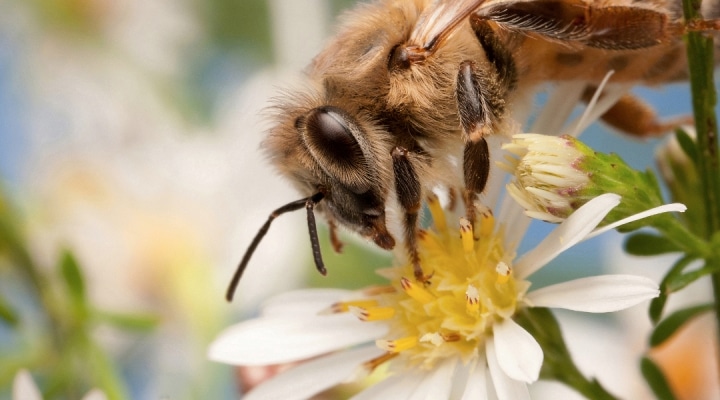 In the fall, in Iowa, honey bees gather pollen from asters and other flowers that were found to have higher levels of some nutrients that may better support bee colonies through a cold winter. (Photo by Peggy Greb)

WASHINGTON — Whether the pollen honey bees collect comes from spring or fall flowers can be a vital factor in supporting the annual cycle of behaviors that sustain a honey bee colony, according to a study by U.S. Department of Agriculture’s Agricultural Research Service scientists.

Biologists know that many animals such as deer or elk have different nutritional requirements throughout the year depending on the season. These differences in nutrient needs are supported by the plants in the areas where the animals live. In the spring, nutrient-packed resources such as plant shoots meet the elevated nutritional demands of rearing young. In the fall, lipid-rich seeds and fruit supply high-calorie reserves that provide fat stores for the during winter.

“We thought there might be a similar relationship between honey bee nutritional needs and nutrients in seasonal pollens. In the spring and summer, honey bee colonies concentrate on raising new bees. In the fall, they shift to preparing for a winter that is often spent in the hive surviving the cold. These activities may have different nutritional needs,” explained ARS entomologist Gloria DeGrandi-Hoffman, who led the study. She is the research leader of the ARS Carl Hayden Bee Research Center in Tucson, Arizona.

“Determining the nutritional needs of honey bees at different times of the year and how they are met with pollens from different seasonal flowers is a key to maintaining the health of honey bee colonies. With more specific information about nutrients in seasonal pollens, seed mixtures for pollinator plantings could be customized by location and season and seasonal pollen substitute diets could be developed,” DeGrandi-Hoffman said.

To determine if nutrients in spring and fall pollens differ and if their nutrients align to support seasonal activities, the scientists compared spring and fall pollen collected by bees in central Iowa and southern Arizona. Though the types of flowers from which bees foraged in the spring differed between Iowa and Arizona, the spring pollens were similar in many nutrients, especially in the essential amino acids and many fatty acids needed to rear new bees.

One interesting difference between spring pollens from Iowa and Arizona was that spring Iowa pollen had higher levels of the essential fatty acid, omega-3. The study found higher levels of omega-3 were associated with honey bees having larger hypopharyngeal glands (HPG). HPG produce a jelly that is fed to the queen (royal jelly) and young developing bees (larvae); larger HPG make more jelly, which allows more worker bees to be raised.

“This suggests clover species, which largely made up the spring Iowa pollen, could be an important nutrient source for colony growth since it provides high levels of omega-3, and therefore clover should be included in pollinator plantings,” DeGrandi-Hoffman said.

Fall flowers species not only differed between Iowa and Arizona, so did the nutrients they provided to the bees. Fall pollen from Iowa had higher levels of certain amino acids and lipids (fats).

“Higher concentrations of these amino acids and lipids in fall Iowa pollen may better support honey bee colonies confined during the winter” said DeGrandi-Hoffman. “Honey bees are not confined for long periods during southern Arizona winters and may not require the same level of fat stores.”