Home / Iowa / Poll shows farmers aware of prairie strips
A new user experience is coming! We'll be asking you to login to your Morning Ag Clips account March 1st to access these new features.
We can't wait to share them with you! Read more here. 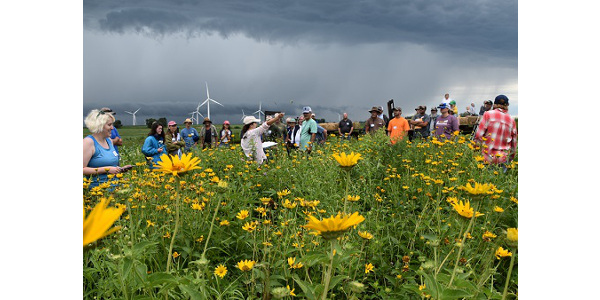 Farmers and landowners learn about prairie strips at a Practical Farmers of Iowa (PFI) field day; courtesy of PFI. (Courtesy of ISU Extension and Outreach)

AMES, Iowa — Word of the prairie strips practice, an innovative soil, water and habitat conservation practice developed over the last decade by researchers at Iowa State University, is spreading across the state. According to the 2018 Iowa Farm and Rural Life Poll, conducted by Iowa State, 56% of respondents said they had heard about the practice.

Since the mid-2000s, the STRIPS project at Iowa State has conducted research on how to incorporate strips of native prairie into fields of corn, soybeans and other annual crops. STRIPS stands for Science-based Trials of Rowcrops Integrated with Prairie Strips.

Project research has shown that converting 10% or less of crop fields to diverse, native perennials can reduce soil loss from fields by 95% and reduce nitrogen loss through surface runoff by up to 85%.

Prairie strips also provide habitat for wildlife, including pollinators and other beneficial insects. An increasing number of farmers and farmland owners are implementing the prairie strips practice and finding it to be a conservation practice that offers multiple production and conservation benefits.

“An interdisciplinary group of Iowa State scientists started the prairie strips research in partnership with the Neal Smith National Wildlife Refuge in the mid-2000s,” said Lisa Schulte Moore, professor of natural resources and ecology management at Iowa State and a researcher on the project. “The results were so encouraging we’re now working with over 60 farmers and landowners across Iowa and neighboring states to help them implement prairie strips.”

Project research and extension staff are starting with just a few cooperators to observe the prairie strips’ effectiveness in real-world situations rather than controlled research plots.

“It’s been so great working with the early adopters of the practice,” said Tim Youngquist, the STRIPS project farmer liaison. “We’re learning from each other how to make the practice work even better.”

The most recent Iowa Farm and Rural Life Poll was published in May 2019, and is available online and at the ISU Extension Store.

Known also as the “Farm Poll,” the survey has been conducted since 1982, and is the longest-running survey of its kind in the nation. Questionnaires were mailed in February 2018 to 2,151 farmers, and the response rate was 50%, with an average age of 66.

Although only a handful of farmers and landowners have actually tried the practice, its potential benefits for erosion control and nutrient loss reduction and provision of habitat for pollinators, birds and many other wildlife species, have led to prairie strips being covered frequently in the farm and mainstream press. This likely has contributed to high levels of awareness.

“Given that the practice has been implemented on so few farms, we were surprised that such a strong majority of farmers had heard about it,” said J. Arbuckle, associate professor and extension sociologist with Iowa State, and a STRIPS researcher and co-director of the Farm Poll. “More importantly, most farmers indicated that they were open to learning more about prairie strips.”

The prairie strips team is poised to build on that potential. “The prairie strips practice was included in the most recent USDA farm bill, which stipulates what conservation practices can be promoted using federal funds and technical assistance,” said Omar de Kok-Mercado, STRIPS project coordinator. “That really opens up the possibilities for prairie strips to spread across Iowa and the Midwest.”

Other topics covered in the 2018 Farm Poll summary include perceptions of quality of life and farm financial well-being, awareness of and participation in watershed management activities, and use of precision agriculture practices.