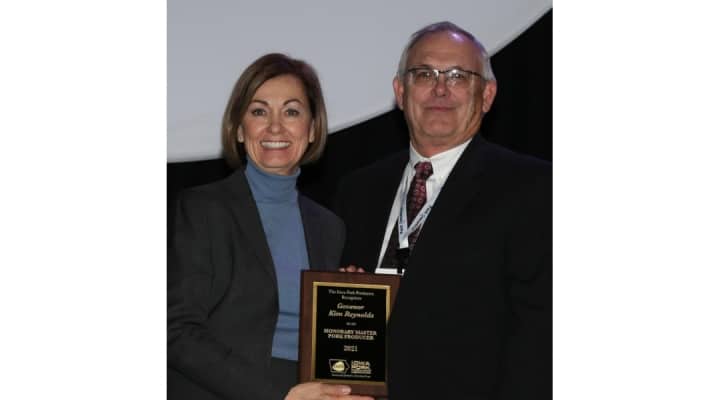 CLIVE, Iowa — Iowa Governor Kim Reynolds and long-time policy influencer Jerry Fitzgerald were recognized as Honorary Master Pork Producers at the 2022 Iowa Pork Congress. Their awards were presented at a recognition banquet on Wednesday, Jan. 26, where several other outstanding members of the pork community were also honored.

“Gov. Reynolds has long been an advocate for agriculture and the state’s rural communities,” said Dennis Liljedahl, as he introduced the Madison County native as one of the two recipients of the honorary award. Liljedahl is the immediate past president of the Iowa Pork Producers Association.

Liljedahl noted that her support for pork producers is seen in her work to maintain and expand export opportunities for Iowa’s pork producers. She has led trade missions to China, Germany, South Korea, Vietnam, the Philippines and Thailand.

During the early days of the pandemic, Gov. Reynolds worked closely with Iowa Secretary of Agriculture Mike Naig and federal officials to make sure meat processing plants were included in the administration’s Defense Production Act. “That effort propped up the supply chain that helped many Iowa livestock farmers find markets for their animals in the country’s effort to keep fresh meat available to consumers,” Liljedahl said. “She also worked to provide workable protection for those working in the plants that were so critical to the nation’s food supply. And as pig farmers, we know how important it is that health and safety is a top priority,” he said.

The Governor is still providing a strong infrastructure for the pork industry with her support of the new Veterinary Diagnostic Laboratory at Iowa State University in Ames. “Her support of that project will continue to promote day-to-day animal welfare and husbandry while looking down the road to provide foreign animal disease prevention and preparedness. Those are two things Iowa pork producers are especially focused on today,” Liljedahl said.

The other recipient of the Honorary Master Pork Producer award has also had a direct impact on your farm and on our state’s industry, Liljedahl told the hundreds of people at the banquet.

“Jerry Fitzgerald has provided guidance to the Iowa pork industry as the IPPA lobbyist since the 1980s, “ Liljedahl said. “His work has focused on tackling new environmental policies and regulatory statutes.”Fitzgerald’s genuine passion for pork producers ensured that environmental regulations discussed at the state level were both reasonable and science-based. He has guided and assisted with more legislation impacting today’s pork industry than anyone else.

“His ability to do that was that he and his team were successful in working with both sides of the aisle to do what was best for farmers and for the state of Iowa. That ability to reliably get bipartisan support for legislation is a talent that is truly appreciated in today’s political climate,” Liljedahl said.

“From environmental regulations to foreign animal disease preparedness, to any other industry issue, Jerry has represented the pork industry with integrity and honesty—two things that are emblematic of pork producers’ way of doing business, and for that we feel he is indeed an Honorary Master Pork Producer,” Liljedahl concluded.

CPDF to host Grazing on the Greens

Outstanding achievement on behalf of Soy