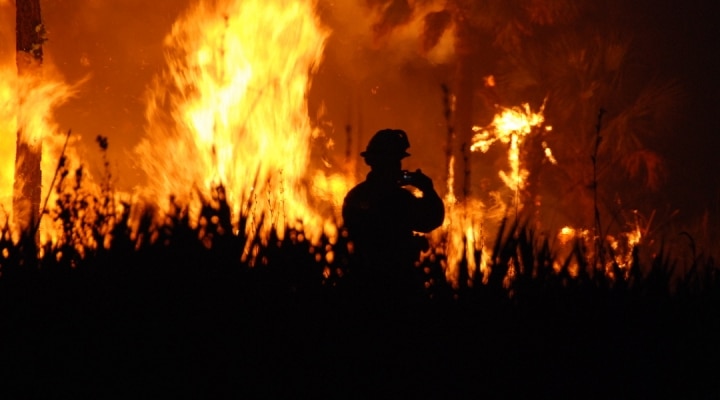 WEED, Calif. (AP) — Officers shot and killed a man who pulled a gun as they tried to keep him out of a complex of marijuana farms in an area of far Northern California where thousands of people were ordered to evacuate as a wildfire raged during a heat wave enveloping part of the U.S. West, authorities said.

Siskiyou County Sheriff Jeremiah LaRue told The Sacramento Bee that the man was trying to drive into the Mount Shasta Vista subdivision on Monday and pointed a handgun at a group of officers that included a sheriff’s deputy and local police.

“Based upon preliminary information, it appears that there might have been a couple rounds fired from the suspect’s firearm,” LaRue said.

The officers killed the man, who was not immediately identified.

The subdivision has been converted into a huge network of marijuana farms mostly run by Hmong and Chinese families. The county has banned large-scale marijuana cultivation but thousands of pot greenhouses have sprung up. Police efforts to shut them down have been countered with claims of racial discrimination, and the families are pursuing a federal civil rights lawsuit.

Hmong people fought for the U.S. during the Vietnam War after being recruited by the CIA in Laos to fend off communist forces. After the war, many Hmong refugees moved to Minnesota, Wisconsin and California, where they settled in the Central Valley, given their agricultural background.

The total number of people forced to flee the area was unclear. The Sacramento Bee reported that nearly 3,000 people live in Lake Shastina and as many as 8,000 others live in the area to tend to the thousands of marijuana grows.

“All evacuation orders are still in place at this time. We do not know what structures have burned down and the status of many areas,” the Sheriff’s Office said on social media Tuesday.

Ignited by lightning on June 24, the fire is burning brush and timber in the Shasta-Trinity National Forest north of the town of Weed, about 250 miles (402 kilometers) north of San Francisco.

“The expertise on the ground called it contained,” Mack said of the quarter-acre blaze. “There was no smoke. We patrolled it a couple of times, drove off and we were going to have resources come back.”

Shasta Trinity National Forest spokeswoman Adrienne Freeman said crews had dumped thousands of gallons of water on the blaze to “drown it and get into all the nooks and crannies” and used their hands to check for heat, the San Francisco Chronicle reported.

Some 800 firefighters were battling the flames in rough and rocky terrain.

They faced a tougher fight because the region was under excessive-heat warnings, with high temperatures expected to range from 100 degrees (38 Celsius) to 110 degrees (43 Celsius).

It comes as an unprecedented heat wave in the Pacific Northwest broke temperature records in Seattle and Portland, Oregon, this week and moved inland Tuesday. Climate change is making such extreme weather events more likely and more intense.