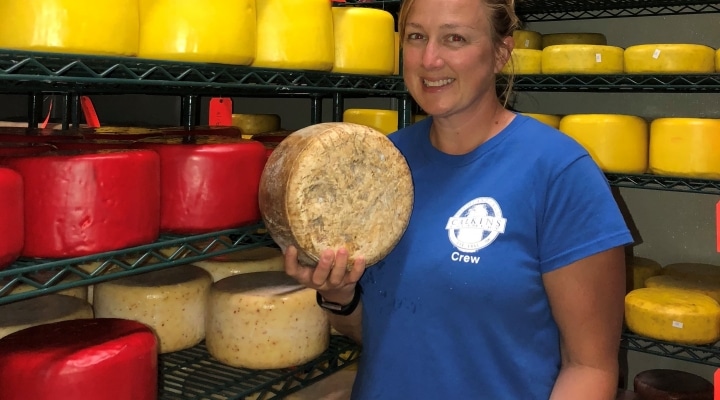 With October being American Cheese Month, Emily Montgomery of Calkins Creamery on Highland Farms in Wayne County, PA shared how she started making cheese 15 years ago and how she manages growing demand for her farmstead creamery products. In the Center for Dairy Excellence’s 12th episode of the “Cow-Side Conversations” podcast, Montgomery discussed both the rewards and challenges of managing a small-scale creamery on her family’s dairy farm—including how she achieves quality and consistency, drives profitability for the farm, connects with customers, and meets food safety standards. (photo by Center for Dairy Excellence)

HARRISBURG, Pa. — With October being American Cheese Month, Emily Montgomery of Calkins Creamery on Highland Farms in Wayne County, PA shared how she started making cheese 15 years ago and how she manages growing demand for her farmstead creamery products. In the Center for Dairy Excellence’s 12th episode of the “Cow-Side Conversations” podcast, Montgomery discussed both the rewards and challenges of managing a small-scale creamery on her family’s dairy farm—including how she achieves quality and consistency, drives profitability for the farm, connects with customers, and meets food safety standards.

Montgomery opened the podcast by describing how she made the decision to come back to the family farm and add a creamery in 2003. With her dad and brother milking approximately 90 Holsteins and Montgomery being the sixth generation on the farm, she spent time analyzing the feasibility of a creamery before moving forward with a plan.

“We started doing some research on the farm to see if it was feasible to do a creamery operation there. I had been in the food industry prior, and our whole goal was to come home and see if we could help sustain the family farm. We did a lot of research and ended up landing on cheese-making because it seemed like the more affordable option at the time,” Montgomery shared. “It seemed to make more sense to do cheese because you can age it longer, and if you’re still trying to build up a market, the cheese would only get better as it aged. That was our theory.”

With a degree in food science from The Pennsylvania State University and experience working in quality assurance and research and development for several food companies, Montgomery spent time shadowing people on other farm-based creameries before starting her own. In addition to looking at finances, Montgomery says she also considered their farm’s demographics, potential markets, and target customers during the feasibility analysis.

“Honesdale in Wayne County is very small and spread out, so it’s not as easy to distribute the cheese,” Montgomery said in the podcast. “But we’re centrally located to Philadelphia and New York City, and we knew the larger demographics of the cities could help support us if we could get our cheese into those avenues. It has worked out for us.”

Being close to these two major cities has helped Montgomery find success in the wholesale department. She says approximately 90 percent of their current sales are wholesale, and thanks to multiple distribution routes, they have established outlets in both cities as well as local routes in Wayne County. They also move product through their farm store and sell cheese online, especially in December when they typically fulfill about 1,000 holiday cheese boxes.

Throughout the podcast, Montgomery shared how they structured the dairy farm and creamery to keep her family involved in decision-making.

“We made the decision to keep the farm and creamery completely separate to keep it clean for tax purposes, accounting, and payroll. We have separate employees and almost nobody crosses over,” she explained. “The creamery is an LLC ,so the owners of the creamery carry over to the farm. Because the creamery is on farm land, we wanted to keep all parties involved so there was never any arguing since everyone is helping to make decisions.”

According to Montgomery, they use approximately 35-40 percent of the farm’s total milk supply for cheese. She likes to have higher fat components for her cheese, so her dad and brother breed for components to keep those high in their Holstein herd. The ultimate goal is to boost profitability for the dairy farm.

“Our goal is to be able to pay the farm more for their milk than what they are getting from the cooperative. We basically look at what they’re getting per month and we have a certain percentage we pay above that,” she shared. “If milk price is really low like it has been the last few years, we have a cap. The more milk we use, the more money they get for the farm.”

Montgomery and her team currently make about 27 different varieties of cheese. They started by making raw milk cheeses such as gouda, Havarti and cheddar, and after adding a pasteurizer to the facility in 2010, they found additional revenue streams through soft-ripened cheeses and fresh cheeses. These fresh cheeses include brie, cork-style mozzarella, and cheese curds—their largest-growing product. As the creamery has grown, Montgomery has gone from making two-pound wheels of cheese to approximately 1,500 pounds of cheese per week.

“The hardest part with a small farmstead creamery is getting the repeatability and quality factors, so your customers know what to expect every time they have your cheese,” Montgomery said. “The first few years were a rockier start to get that consistency, but over time when you’re batching day after day, you learn what to adjust and how much culture you should add based on your milk components.”

While Montgomery describes the cheese-making process as a “labor of love,” she also says forecasting demand and economic conditions can be a challenging part of the business.

“With COVID hitting last year, a lot of our customers disappeared because of the restaurant businesses being closed. A lot of people were going to smaller businesses so those picked up for us tremendously and we had a ton of new accounts,” she explained. “This year, when things opened back up, all of our old accounts popped back up. So we’re experiencing huge growing pains and trying to figure out how to keep up with demand. You wouldn’t have projected that with the economy last year, so it’s just part of it.”

Learning how to manage time-consuming details and maintain strict food safety standards are also important parts of any cheese-making business, no matter the size.

“For cheese-making, you really need to be detail-oriented. You’re looking at time and temperature combinations and how long it takes to set the cheese. There is a lot of science behind it,” Montgomery said. “You’re also held to the same standards as a lot of the large cheese companies. Just because you’re small and attached to a farm, you have to be ready to be held to the same standards as everyone else in the industry.”

For dairy producers who are looking to enter the value-added space and are considering starting a creamery on their operation, Montgomery encouraged them to take their time learning from others and developing a clear plan.

“Go to some creameries and farms you know who have been in it for years. Take a look at their operations, and ask them detailed questions on what they would and wouldn’t do,” she added. “Being 15 years in, I would probably redesign our whole facility differently now based on the flow of our product. It’s really tough to figure that out at first. I would talk to as many people as possible and shadow others.”

To listen to the full podcast interview, visit www.centerfordairyexcellence.org/podcast. The podcast is also available on Spotify, Apple Podcasts, and Amazon Music. With a new episode released each month, Montgomery’s interview is the 12th in the series. The podcast was designed to share real-time farmer insight, tricks of the trade, and inspiring stories from dairies across Pennsylvania.