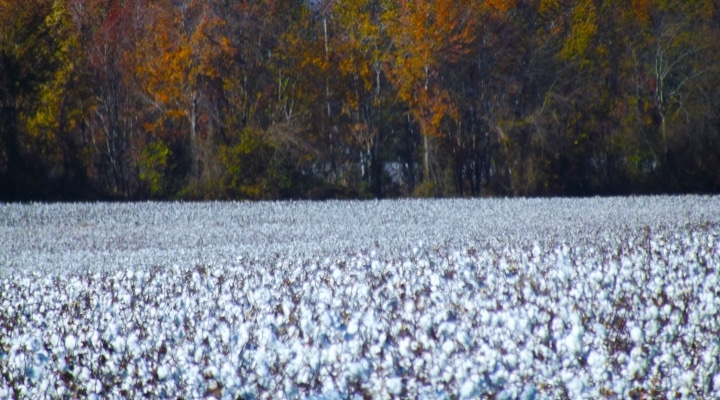 In its crop production forecast released Oct. 12, the National Agricultural Statistics Service reported Virginia farmers expected to harvest 133 million pounds of peanuts this year, up 19% from last year. Cotton production also is projected to increase drastically at 160,000 bales, a 26% upturn from 2020.

In Southeast Virginia, “we caught some showers and rain on a regular basis that areas west of us missed, which helped to fill out those crops,” said Mike Parrish, a Virginia Cooperative Extension agent in Dinwiddie County.

“It’s been a good season for peanuts—nice and dry for easy harvesting,” he added. “There’ve been a few challenges with some cotton growing again due to the hotter weather, but other than that, we’re just waiting on the bolls to open up and the lint to fluff out. Farmers should be out picking in the next week or so.”

According to the NASS crop progress report from Oct. 17, Virginia’s entire peanut crop is in fair or better condition, with 85% rated good or excellent.

Fifty-five percent of the state’s peanuts have been harvested this fall—a 31% increase from this time last year and a 3% increase over the five-year average.

Dell Cotton, executive director of the Virginia Peanut Growers Association, said it could be a banner year for peanut farmers.

“I don’t see why our farmers can’t match what USDA has us projected at, which is to produce 4,600 pounds to the acre,” he noted. “This year has been very similar to 2019, which was when we set the current record at 4,650 pounds produced per acre. Give us one more week, and I expect we’ll be close to that number again.”

Cotton said Southeast Virginia has avoided drought conditions that have affected most of the state throughout summer and early fall, and that has created suitable growing conditions for peanuts and cotton.

Suffolk farmer Joseph Barlow, who serves on the Virginia Farm Bureau Federation Cotton Advisory Committee, explained it’s too early to predict how the state’s cotton crop will pan out.

However, he mentioned an above-average crop year is within reach if dry and mild weather continues, which would be a boon for growers who took a loss last year.

“That would be phenomenal,” Barlow said. “There were many people, ourselves included, who were hurt bad last year. And with prices where they’re at right now, there’s money to be made with a decent crop.”

Grant beefs up grazing initiative that benefits farmers and environment

Consumers find comfort in ice cream and butter during pandemic