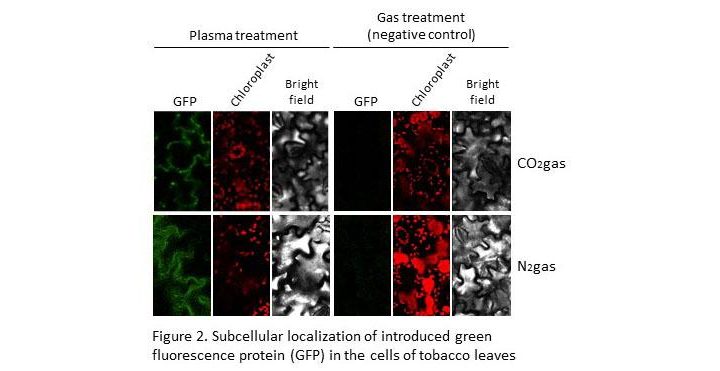 This is a subcellular localization of introduced green fluorescence protein (GFP) in the cells of tobacco leaves. (Tokyo Institute of Technology, NARO)

TOKYO — The introduction of organic matter, such as proteins, into living cells has multiple uses for basic scientific research and industrial techniques. For example, the behavior of cell components can be traced by introducing a protein that emits a fluorescent signal into the cell. While scientists have long been successful in delivering proteins into living animal cells, there are difficulties in using the same techniques for plant studies.

Developing a non-destructive method for protein introduction that could be used for genome editing and controlling a functionality, for example. Moreover, it will be expected to control flowering time by introducing flowering control proteins. With this in mind, Yuki Yanagawa and co-workers at the Institute of Agrobiological Sciences, NARO together with Akitoshi Okino and colleagues at the Tokyo Institute of Technology, Japan, have developed a potentially useful technique for introducing proteins into plant cells using non-thermal atmospheric pressure plasmas.

Plasmas are created by adding energy to a gas, causing the atoms in the gas to become ionized. Plasmas have already proved invaluable in multiple applications and recently showed promise in inactivating bacteria by damaging the bacterial cell surfaces. Thus, the same process may be used to disturb the surface structure of plant cells, allowing proteins to enter the cell interior.

The team tested their theory on tobacco, rice and Arabidopsis leaves or roots. They exposed groups of leaves to one of five different plasma types, and then immersed the leaves into solution containing a green fluorescent protein (sGFP) — adenylate cyclase fusion protein. They found that those leaves treated with either carbon dioxide or nitrogen gas plasmas showed a high uptake of the protein into their cells.

Protein introduction by plasma must be done by a completely different principle from any other existing techniques. Because it does not need any special pretreatment to plant tissues and/or proteins themselves, it is simple. In addition, it is scalable because the plasma jet apparatus can be modified in size. The researchers are hopeful that their method could prove useful for various plant species and tissues in future.

The method for introducing organic matter, such as proteins, into living cells has been successfully developed in the biological sciences. Existing techniques for introducing organic matter into animal cells include micro-injections and transfection (where tiny holes or pores are opened up in the cell membrane to allow material to pass through). However, most of the methods are developed in animal cells, and there are additional obstacles in plants because of the different structure of plant cell surfaces and cell walls.

Implications of the current study

The technique could be extended to introduce various different proteins in different plants, and could have applications in plant genome editing, analysis of protein function and the fine control of plant properties for research and industrial applications.

–Tokyo Institute of Technology
via EurekAlert!