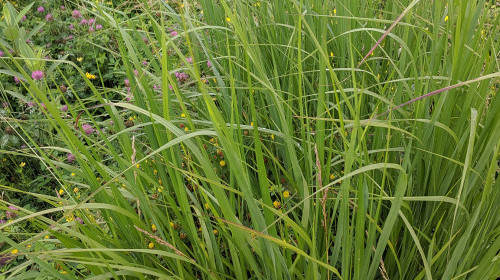 Switchgrass and Indiangrass, both prairie grasses, can survive flooded conditions and even drought. (OSU CFAES)

LONDON, Ohio — Like many of us, farm animals want to eat what they’re used to.

And because livestock are not adventurous eaters, farmers have to train them to try something new by limiting their access to the food they’re most familiar with. That can be done by growing new grasses in a different field, and then moving the livestock to graze on that field.

It’s kind of like when parents don’t give the option of chicken fingers and buttered spaghetti to their picky child and instead serve just roast and broccoli.

Many farmers in Ohio might be trying to grow and feed their animals different grasses this year, as supplies for hay and traditional forage grasses are exceptionally low. Ohio’s hay supply is the lowest since the 2012 drought, and the fourth lowest in 70 years. This past spring was persistently wet, which hindered the growth and cutting of hay and other forage grasses.

“If we can become more flexible in terms of what we grow and how we move our animals around, that can increase our options for feeding them,” she said.

Gelley is hosting a talk on how to do that: “Forages for the Extremes—Drought and Flood Tolerant Options” on Sept. 18 and Sept. 19 at the 2019 Farm Science Review near London, Ohio. FSR is sponsored by CFAES.

Typically, Ohio farmers grow cool-season grasses for their cows, sheep, and other livestock, including orchardgrass and Kentucky bluegrass, Gelley said. The problem is that those grasses can’t always withstand an abundance of rain, which has become increasingly common in recent years. Ohio experienced its wettest yearlong period on record from June 1, 2018, to May 31, 2019, which left soils persistently saturated.

Unlike cool-season grasses, prairie grasses have extensive root systems that help them survive in flooded conditions and even drought, Gelley said. The downside is that prairie grasses can take three years to get established.

“It’s not something we could plant this fall and expect to sustain our animals next spring. But once they’re established, they can last for decades,” Gelley said.

Reed canarygrass, a cool-season grass not commonly used for grazing, can be a good source of food for animals and is very tolerant of chronically wet soils, Gelley said. Anyone who plants reed canarygrass should be aware that it’s an invasive species and can easily take over a field unless animals get in there to graze it often, she said.

Tall fescue, the most common grass in Ohio, also can withstand soggy soil, but certain varieties of the grass can limit weight gain in livestock that eat it. Tall fescue contains a fungus that makes the plant more resistant to drought but also can limit weight gain. However, some varieties, while still containing the fungus, do not have that effect on animals’ weight, Gelley said.

With many of the alternative grasses, there are tradeoffs to consider before planting them.

“But which would you rather have during extreme weather events: nothing for your animals to eat or something with issues that we know we can work around?” Gelley said.

For a schedule of all the talks at the Gwynne Conservation Area, visit  go.osu.edu/gwynneschedule.