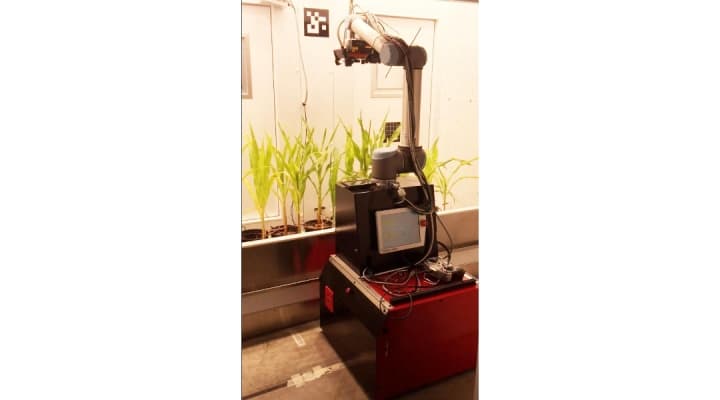 The study, published on Tuesday in the academic journal The Plant Cell, shows how a response called the unfolded protein response helps to activate the heat shock response when corn plants are exposed to hot weather conditions. The two responses operate in different parts of plant cells, and scientists previously assumed the responses were independent. But data gathered using the Enviratron, a highly controlled and automated facility at Iowa State equipped with a robotic rover and growth chambers, allowed the research team to show how one response influences another.

“These two systems have been thought to operate independently,” said Stephen Howell, Distinguished Professor of Genetics, Development and Cell Biology and senior author of the study. “We’ve been able to show these systems sometimes work together to mitigate damage caused by heat and to protect the plant from stress.”

Heat stress causes proteins to denature and misfold in the endoplasmic reticulum, an organelle inside cells. Misfolded proteins can be toxic, and their buildup sets off an alarm that activates the expression of genes that protects plants from heat stress. A similar response plays out in different locations of the cell, including the cytoplasm, where excessive heat activates the expression of a different set of genes encoding heat-shock proteins.

The new study shows that, although the two responses take place in different parts of the cell, they actually work in concert during heat stress: a powerful transcription factor produced in the unfolded protein response activates the expression of a key factor helping to trigger the heat shock response.

“There’s a seesaw balance, if you will, between defense and growth,” he said. “The more you contribute to defense, the more you sacrifice growth. It may be that you could provide somewhat greater defense to crops but you might do so at the expense of growth.”

In their study, the researchers drew on data gathered in the Enviratron, a state-of-the-art facility at the ISU Ag Engineering/Agronomy Research Farm that utilizes a robotic rover that travels through a series of specialized growth chambers that carefully control the environments in which the plants are raised. Development of the Enviratron was funded through a grant from the National Science Foundation. Zhaoxia Li, first author of the paper and a postdoctoral scientist in Howell’s lab, said the facility allows researchers to control variables such as temperature, moisture, light and carbon dioxide concentrations to study their effect on plant development.

Howell said previous scientific papers have described the design and construction of the Enviratron, but this is the first publication in a journal based on data generated in the facility.

“We hope that studies like this will emphasize the value of conducting such research under controlled environmental conditions offered by the Enviratron,” he said.

NMPF: Food-chain return to "normal" is slow, but it will happen