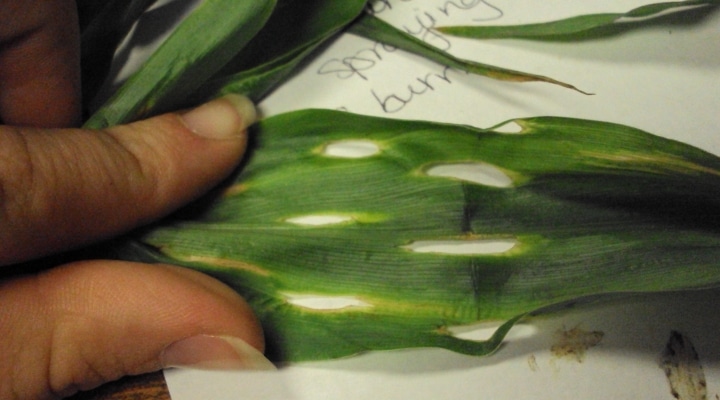 Surinder Chopra, professor of maize genetics in Penn State’s College of Agricultural Sciences, has been awarded funding from the U.S Department of Agriculture’s National Institute of Food and Agriculture. (photo by MUExtension417, creative commons/flickr.com)

UNIVERSITY PARK, Pa. — Surinder Chopra, professor of maize genetics in Penn State’s College of Agricultural Sciences, has been awarded funding from the U.S Department of Agriculture’s National Institute of Food and Agriculture.

The $455,000 grant will support a four-year research project to study the role of plant flavonoids in strengthening the defense response of corn by mitigating insect suppressive cues. The project also aims to explore plant- and insect-associated microbial diversity, which may play a role in weakening or strengthening plant defense mechanisms.

The research will characterize mechanisms that are responsible for fall armyworm mortality. Understanding of plant defense pathways strengthened via the secondary phytochemicals is an important aspect toward environmental sustainability, according to Chopra.

“Usage of agrochemicals has become an integral part of today’s crop-protection strategies, and large-scale chemical deployment strategies have led to negative consequences on non-target beneficial insects due to atmospheric, ground and surface water pollution,” he said. “Alternatively, a reduction in the use of these harmful synthetic chemical pesticides may be possible by developing sustainable strategies of crop protection.”

In previous studies, Chopra’s research group has demonstrated increased mortality and reduced growth of corn leaf aphid feeding on sorghum lines that expressed flavonoids. And his lab has explored additional flavonoid compounds expressed in its corn breeding and genetically engineered lines that are the cause of mortality of fall armyworm larvae.

“So, in this research project, we are characterizing the interaction of specific flavonoid compounds with plant- and pest-associated microbes to understand the mechanism causing larval mortality,” Chopra said. “Based on several preliminary pieces of evidence, we hypothesize that flavonoid toxicity could be due to their direct/indirect effects on salivary and/or gut metabolic processes. We will test these hypotheses.”

This research project would not have been possible without the involvement of a group of graduate and undergraduate students and researchers, Chopra pointed out, including Dinakaran Elango, Debamalya Chatterjee, Michelle Peiffer and Tyler Lesko.

Learn how to apply for loans on your dairy farm business with webinar
September 14, 2020