Professor of Horticulture Richard Marini, who led Penn State’s Horticulture Department as it evolved to become the Department of Plant Science, retired July 1 after a four-decade career that left a huge mark on the fruit tree industry. Shortly after starting work at Rutgers University in 1981 teaching tree fruit science, plant physiology and advanced fruit physiology — and conducting research on peach production — he joined the North Central Regional Rootstock Research project. Marini’s involvement in that multistate initiative, which evaluates fruit tree rootstocks and orchard systems, had a tremendous influence on him throughout his career.(file photo)

UNIVERSITY PARK, Pa. — Professor of Horticulture Richard Marini, who led Penn State’s Horticulture Department as it evolved to become the Department of Plant Science, retired July 1 after a four-decade career that left a huge mark on the fruit tree industry.

Shortly after starting work at Rutgers University in 1981 teaching tree fruit science, plant physiology and advanced fruit physiology — and conducting research on peach production — he joined the North Central Regional Rootstock Research project. Marini’s involvement in that multistate initiative, which evaluates fruit tree rootstocks and orchard systems, had a tremendous influence on him throughout his career. 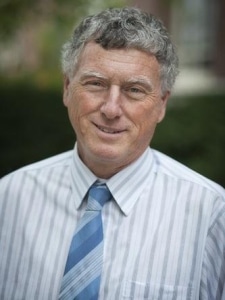 “Twenty-six states are involved in this project, and while attending the annual meetings as a young faculty member, I learned from the experiences of the best pomologists in North America,” he said. “During the past five years, as the administrative advisor for the project, I mentored younger pomologists. The results of this project impact every orchard in the country, and five years ago we estimated that the economic impact of the project exceeded $100 million.”

After four years at Rutgers, where he learned a lot about the fruit industry, Marini moved to Virginia Tech, where he was the extension tree fruit specialist for 19 years. He came to Penn State in 2004 from Virginia Tech to take the helm of the Horticulture Department. A few years later, its faculty was merged with agronomists in the Crop and Soil Sciences Department to create the new Plant Science Department.

The transition demanded steady, patient guidance, Marini recalls. “I had been a student in two plant science departments that resulted from mergers, and I knew that mergers can cause dissension and rarely result in unified departments,” he said. “But thanks to the work and cooperation of the faculty and staff, I think the merger went as smoothly as possible.”

He stepped down as department head after 12 years, and during the past six years, he has taught or co-taught small fruit production, the science of wine, analysis of data with quantitative factors and the lab section of environmental effects on horticultural crops. Looking back, Marini noted that he derived the most pleasure and satisfaction from helping students and faculty solve professional problems.

“I was fortunate to have mentors throughout my life who took the time to teach me pomology, and this made my learning curve less steep,” he said. “Unfortunately, with the downsizing of horticulture programs across the country, new faculty members do not have these mentors, and it will take them much longer to develop the expertise needed to help the rapidly changing fruit industry.”

Marini had a major impact on both Penn State’s College of Agricultural Sciences and the tree fruit industry, according to Erin Connolly, head of the Plant Science Department. “Rich has had an exceptionally long and distinguished career in teaching, research, extension and administration,” she said. “His work in research and extension on a variety of topics related to both tree and small fruit production has had enormous impacts on sustainable production systems and profitability.”

Marini, Connolly noted, is an accomplished educator of undergraduates, graduate students and growers who is widely known for his expertise in statistics as well, and he generously has helped countless faculty and students work through research study design and data analysis.

Marini grew up with horticulture and extension. Originally from Massachusetts, his grandparents had a vegetable farm there, and his father was a county agent. “I think my involvement in 4-H was influential because, as a junior leader, I learned some leadership skills,” he remembers. “During high school, I was also a member of the National Junior Horticultural Society where I met other teenagers with horticultural interests.”

Over his career, he has enjoyed working with the horticulture industry. He has been responsible for developing and participating in educational programs for fruit growers and collaborating with faculty to solve industry problems.

“I think my research projects that had the greatest impact included working with entomologists to modify the thresholds of several insect pests that resulted in reduced pesticide applications; pruning apple and peach trees to increase yield and profitability; and evaluating rootstocks and orchard training systems to increase profitability,” he said.

Marini expressed love for his work. “It may sound cliché, but I felt fortunate every day as I drove to work,” he said. “The three missions of the college — teaching, research and extension — provided different challenges and opportunities, and I liked them all.”

He got the most satisfaction from helping people, he said. “My most enjoyable days were when someone would call me and tell me that they had their best crop due to a practice that I recommended, or when a student told me they enjoyed my class and learned a lot.”

Marini is transitioning slowly into retirement. Over the next few years, he plans to continue meeting with students and faculty to discuss experimental designs and data analysis. He has agreed to participate in several extension programs, both in-state and out of state this winter, along with continuing to serve as editor of the Journal of the American Pomological Society.

Marini and his wife, Michele, intend to remain in Centre County to be near their two sons and two grandsons.

Free safety workshop to focus on youth working in agriculture