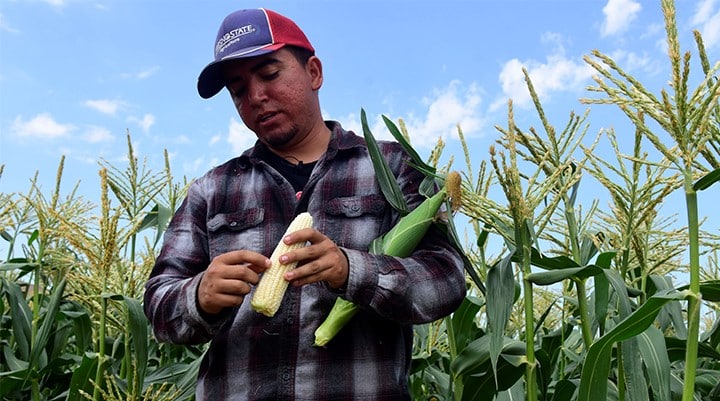 FRESNO, Calif. — While many students were finishing the spring semester virtually at home this past May, plant science senior Ulises Gonzalez found himself seven hours away at a Hampton Inn in El Centro, in Imperial County.

The Madera native was more than a little nervous as he wrapped up his last semester and prepared for his final exam in crop nutrition, arguably the hardest class he had taken at Fresno State. However, he also knew it would be one of his most valuable courses and one that he could utilize the rest of his career.

He ultimately got a B+ on that exam, but more importantly, he had already taken care of the bigger challenge of finding that first full-time job after graduation.

A week before, he had already clocked 60 hours in his first week working in employee relations for Olam. The spice and commodity leader has an equally well known global reputation for its cacao, coffee, nut and dairy products. Spanning over 60 countries, it works closely with 5 million farmers through a network of processing and distribution chains.

“It was a little challenging at first,” Gonzalez said, “because the company wasn’t afraid to push me out of my comfort zone and gave me a lot of responsibility working with supervisors and crews in the field. I thought my first job would focus on my previous skills working in the field with crops, but they put me on a leadership path with lots of growth opportunities.”

Not surprisingly that first week on the job was a busy one, and made extra complicated by new COVID-19 health and safety standards.

After driving to the Imperial Valley area near the Mexican border, he worked with his manager to monitor operations of thousands of acres of garlic and onion that would be dehydrated and used for spices.

In subsequent weeks through July he checked on other farming operations along the five-hour journey northward into Arizona. At each location, he worked with supervisors and labor workers to make sure that various production, safety and human resource protocols were being met.

The rest of the summer was just as busy, as he drove back and forth between the company’s Hanford office to other Central Valley farms between Los Banos, Stockton and Bakersfield.

Luckily, he had been prepped for the professional world since he had started at Fresno State in the spring of 2018. Balancing two jobs, a campus research assistant position, as well as his normal course load meant he often got four to five hours of sleep most weeknights before his 4:30 a.m. alarm went off.

Six years before, however, the Madera South High School valedictorian was headed in a different direction and attended Fresno City College hoping to become a civil engineer. After finishing his associate degree, he decided he didn’t want a job sitting behind a desk.

Such a drastic career switch was made easier since he already worked full time year-round with Agriland Farming. The Chowchilla-based company helps manage over 27,000 acres of almonds, citrus, fig, grape, pistachio and walnut crops.

“They put me in everything, from crop applications to working in their irrigation ground well division,” Gonzalez said. “Agriculture is so broad, so you can never stop learning. The extra experience in irrigation, nutrition and nut crop harvest gave me a great foundation to understand how all the production operations work together.”

That experience came in handy at Fresno State when he added a second job as a campus farm student assistant and helped raise its famous sweet corn.

It’s a full-time job in the summer that can start as early as 6 a.m. each weekday and part time the rest of the year. Planting normally starts in January and continues through the start of summer on 70 acres to produce the 600,000 ears that are sold at the Gibson Farm Market each year.

“The process is demanding and taught me so much,” Gonzalez said. “I’ll never forget the one day when I walked into one of the fields and realized the corn was taller than me (after planting it only a few months before). It was a feeling I could not explain, and that’s when I knew I picked the perfect major.”

While people enjoy the same great taste all summer long, the corn’s needs are different each day.

Temperature and moisture levels change dramatically from January to September, so workers delicately balance the right amount of water, sun and nutrients. Employees constantly check the crop and make adjustments to help minimize the effects of insects, weeds and other plant and soil diseases, while trying to maximize the product quality.

A new wrinkle for student assistants is meeting voluntary Global Good Agricultural Practices standards that are stricter than state and federal regulations. “It involves extra work, and a lot of documentation every step of the production cycle,” Gonzalez said, “but it’s something that taught me how to be an even better grower while learning more about food safety and sustainability.”

Plant science classes such as soil science, nutrition and pathology gave him a new lens to use in the fields at both jobs.

“The experience gave me an understanding not many people will ever get to see,” Gonzalez said, “and why some steps, such as watering on time or spraying are so critical. This knowledge can be applied to other crops and allows me to better understand stress and irregularities.”

Overseeing orchards is a potential career destination, and one he had some experience with when he turned 18 and worked in almond orchards with his father, Adan. His initial agricultural experience came, however, next to his mother, Soledad, in wine vineyards on the weekends and during vacation breaks starting at the age of 14 to help pay family expenses.

While some youth become less close to their parents as teenagers, his bond was tightened even more as he helped translate various bills and legal documents such as family tax forms to his Spanish-speaking parents. By the time he was 16, they were including him in family decisions involving new cars and potential moves as if he was a third parent.

“I’ve been lucky that I’ve been close to my parents since a young age,” Gonzalez said. “I still have memories of working next to my mom and getting whacked so hard in the face by a vine and her laughing and saying that I was letting an old woman with arthritis do a better job. I have so much respect for what she and my dad have done for me, and I wouldn’t have accomplished any of this without them. I know they’re proud of me, and I’m equally proud of them.”

The only thing remaining is to take tests in the upcoming year for his Certified Pest Adviser Certified Crop Adviser certifications, which would allow extra authority to implement crop-enhancement products and methods.

“All my plant science classes like crop nutrition solidified my love for agriculture, and I hope I can make as big an impact on others as my mentors have had on me,” Gonzalez said. “Fresno State is one of the best agriculture schools you can find, and its hands-on training can’t really be achieved anywhere else. I have always been around crops and crop health, that’s why I always say, ‘I’m staying true to my roots.’”