Home / South Carolina / Plant geneticists unravel key to pesky pigweed’s resistance to glyphosate
A new user experience is coming! We'll be asking you to login to your Morning Ag Clips account March 1st to access these new features.
We can't wait to share them with you! Read more here. 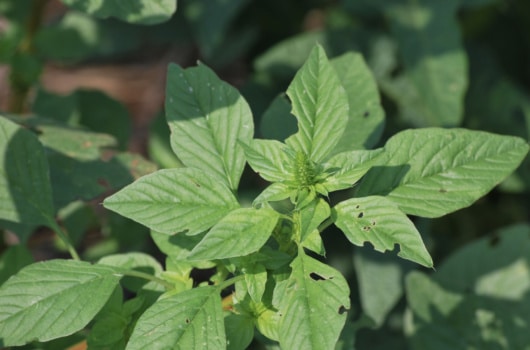 CLEMSON, S.C. – Just hearing “pigweed” can cause fear in cotton and soybean farmers, but a Clemson University geneticist and others believe they have discovered the armor this dreaded weed uses to protect itself against the herbicide glyphosate.

The researchers have determined a specific genetic feature, the extrachromosomal circular DNA (eccDNA) replicon, gives pigweed, or glyphosate resistant palmer amaranth, its resistance to glyphosate and makes this weed difficult to control.

“The DNA structure of the eccDNA replicon is sophisticated,” said Saski, an associate professor of systems genomics in Clemson’s Plant and Environmental Sciences Department. “This circular molecule contains functional genes intermixed among complicated repetitive DNA that seemed to have originated from different chromosomes to form the circle. Sequencing it was difficult and was only possible with advanced single-molecule technology, such as provided by Pacific Biosciences.”

Pacific Biosciences is a biotechnology company based in Menlo Park, California.

This discovery provides an explanation of how weeds evolve and adjust to become resistant to herbicides.

Glyphosate was introduced in the 1970s and became the most widely used herbicide on many food and non-food field crops, as well as non-crop areas where total vegetation control is desired.

Fast forward to 1996 when the world was introduced to Roundup Ready crops. These were the first genetically modified crops engineered with resistance to the Roundup brand of glyphosate.

Once a Roundup Ready crop was planted, the whole field could be sprayed and the weeds died, but the resistant crop did not. This worked well for about 10 years until weeds began to appear in sprayed fields. Older herbicides had to be re-introduced to control resistant weeds. Pigweed is now found in 27 states.

During the study, the researchers found pigweed DNA in resistant plants had drastically changed to form a very large, self-replicating circular DNA in addition to its normal chromosomes that carried the gene for the protein that glyphosate attacked.

“What this means is plants like pigweed that contain the eccDNA are able to survive and propagate where glyphosate is used frequently,” Saski said, adding that glyphosate stress might contribute and influence eccDNA formation and activity.

“Understanding the complete genomic structure and function of the eccDNA replicon will aid our knowledge of how plant genomes respond and evolve to stresses and help to further refine herbicide treatment strategies and combat the rise of resistant weeds,” he said.

Saski said future research will focus on how the eccDNA self-replicates in plant cells and identifying the essential functional elements of the eccDNA.

An article about their research, The eccDNA Replicon: A heritable, extra-nuclear vehicle that enables gene amplification and glyphosate resistance in Amaranthus Palmeri,  appears in the current issue of The Plant Cell journal as a BreakThrough Report.

Michael Marshall is a Clemson Extension weed specialist housed at the Edisto Research and Education Center whose research focuses on pigweed. Marshall said this discovery could be a major game changer for South Carolina agriculture.

“Pigweed is an aggressive, invasive weed found throughout the United States,” Marshall said. “Once it is introduced to an area, the weed quickly adapts and produces many small seed. It can quickly become a major problem for producers.”

Pigweed plants can grow 2-to-3 inches per day and compete with crops for nutrients, water, sun and more. Pigweed’s emergence period extends well into the typical crop season and can produce viable seed after crop harvest in the fall.

Pigweed, annual morningglory and sicklepod are the three main weeds South Carolina growers must battle every year. Proper application of herbicides can help relieve some of the pressure, Marshall said.

When the researchers discovered the mechanism that amplifies genes in pigweed, Saski engaged with the Clemson University Research Foundation (CURF).

“Working with the folks at CURF has been an absolute pleasure,” Saski said. “I recently applied for funding to advance this technology and was quickly awarded funds to take this work to the next level.”

CURF manages the process of moving Clemson’s research from laboratories into commercial markets. Their mission is to build meaningful and ongoing relationships with Clemson University researchers, as well as outside resources and industry partners in an effort to commercialize the intellectual property of Clemson University and identify opportunities for research collaboration.