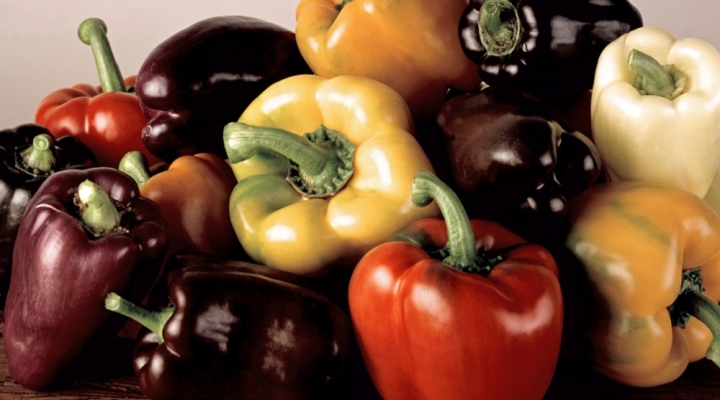 Like potato and tomato, sweet pepper is a member of the nightshade family. Sweet peppers are easy to establish in the garden with started plants, Trinklein said. Since they can’t tolerate cool weather, wait until the danger of frost has passed and the soil warms before planting.

“Sweet peppers need full sun, eight hours or more, and fertile, well-drained garden loam,” he said. “Most varieties should be planted 18 to 20 inches apart within a row, and each row should be at least 24 inches apart.”

Sweet peppers are fairly heavy-feeding plants, so it’s important to have a soil test before planting to determine which nutrients your garden needs, Trinklein added. Also, sweet peppers often benefit from additional fertilizer after they start bearing fruit. “I would advise feeding with a fertilizer high in nitrogen once or twice during the growing season after the plants have set fruit,” he said.

Genetics determine the rainbow colors sweet peppers express as the fruits ripen. “There are no fully mature green peppers in nature,” Trinklein said. “I would guess that 90% of the varieties on the market ripen to red.”

Sweet peppers will bloom throughout the growing season as long as the weather is warm. It’s not uncommon to have peppers at harvestable maturity at first frost, he said. Insect damage is not a major problem for sweet peppers, perhaps because of their pungent taste.

Since individual plants are relatively small, sweet peppers are excellent for container growing.

“When contemplating container gardening for food, sweet pepper and tomato should be high on everyone’s list,” Trinklein said. “Because of limited space, gardeners should choose high-dollar-value vegetables that also are high in nutrition.”

Peppers have long been overlooked for their nutritional value. For example, 100 grams – just over 3 ½ ounces – of sweet pepper has about 97% of the average daily requirement of vitamin C.

“Sweet peppers are a better source of vitamin C than oranges,” Trinklein said. “It’s just not many of us can drink sweet pepper juice like we can orange juice.”

They are also high in lycopene and vitamins A and E. Peppers that are red have more than seven times the lycopene of green peppers, he said.

The dramatic taste difference between sweet peppers and hot peppers comes down to a single gene. Sometime in the course of pepper’s history, a mutation resulted in a recessive gene that blocks the production of capsaicin, the compound that makes hot peppers hot.

Gardeners tend to stick with varieties they know, such as “Yolo Wonder,” but Trinklein suggests trying newer varieties like “King Arthur” that are more productive.