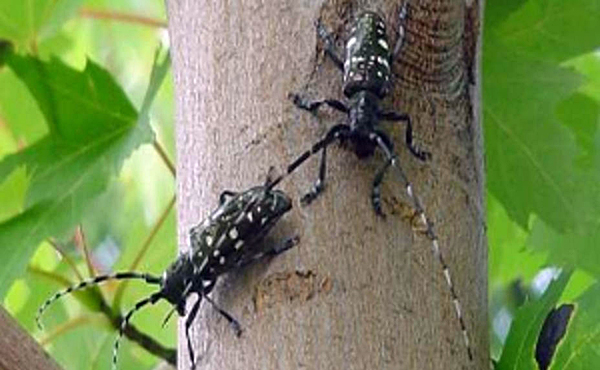 Asian longhorned beetle is a destructive, invasive insect that kills many hardwood tree species. This damage compromises the structural integrity of the tree and makes the tree dangerous for people to be around. If ALB were to become established in the United States, the beetle could become one of the most destructive and costly species ever to enter the country. (U.S. Department of Agriculture, Flickr/Creative Commons)

WASHINGTON — The U.S. Department of Agriculture’s Animal and Plant Health Inspection Service is announcing the latest plans to combat the Asian longhorned beetle. APHIS and its partners are making steady progress towards eliminating this destructive tree pest from the United States.

“We expect to complete our final tree inspections in the New York City boroughs of Brooklyn and Queens by this fall, which shows we’re closing in on eradication,” said Josie Ryan, APHIS’ ALB Eradication Program national operations manager. “But there are still quarantines in place for this beetle in these two areas, as well as in central Long Island, central Massachusetts and southwest Ohio where we are still conducting eradication operations.”

Specially trained federal, state, and contracted employees are inspecting trees that are attacked by the beetle within each quarantined area. As infested trees are found, they will be removed by the program with no cost to the property owner. Program officials will not apply insecticide treatments this year because tree inspections and infested tree removals remain the priority. Program officials monitor for the beetle’s presence inside and outside each quarantined area, respond to service calls, conduct training sessions for compliance agreement holders and perform outreach. All aspects of the strategic approach toward eradicating the beetle are evaluated annually.

“As you use wood this summer, please remember to follow the quarantine laws and buy or responsibly gather firewood where you will burn it, or use certified heat-treated firewood,” said Ryan. “We cannot eliminate this beetle without the help of residents and business owners limiting the transport of wood to help prevent the spread of ALB.”

To avoid spreading ALB, people may not move regulated items, such as firewood (all hardwood species), nursery stock, logs, branches, etc., out of a quarantined area without a compliance agreement, permit or certificate according to federal and state laws. If you conduct commercial work on such regulated articles in any quarantine area, you must enter into a compliance agreement with the ALB eradication program in your state. Before entering into an agreement, you need to attend a free compliance training. To register for a training, please call your local office:

If you live in an ALB quarantined area, you can help by:

Allowing program officials access to your property to inspect trees and remove any infested trees that are found.

Never move wood out of ALB-quarantined areas because it can spread the beetle and other tree pests and diseases. State and federal officials monitor the movement of wood within and around regulated areas to enforce the quarantine. They may issue fines to individuals and businesses that do not comply with the regulations.

Currently, 277.5 square miles are under quarantine for ALB in the United States; 111 square miles in New York, which includes a portion of central Long Island and the New York City boroughs of Brooklyn and Queens; 110 square miles in Worcester County, Massachusetts, which includes all of the Cities of Worcester, West Boylston, Boylston, Shrewsbury and a portion of the Towns of Holden and Auburn; and 56.5 square miles in Clermont County, Ohio, including East Fork State Park, Tate Township and a portion of Williamsburg Township. Infestations have been eradicated in Illinois (2008); New Jersey (2013); Manhattan (2013), Staten Island (2013) and Islip (2011) in New York; Boston (2014) in Massachusetts; and Stonelick and Monroe Townships (2018) in Ohio.

ALB is a destructive, invasive insect that kills many hardwood tree species. This damage compromises the structural integrity of the tree and makes the tree dangerous for people to be around. If ALB were to become established in the United States, the beetle could become one of the most destructive and costly species ever to enter the country. The beetle threatens urban and suburban shade trees, recreational resources such as parks, and forest resources and wildlife. It could also impact industries such as maple syrup production, hardwood lumber processing, nurseries and tourism. For more information about the beetle and program activities, please call the ALB toll free hotline at 1-866-702-9938 or visit www.aphis.usda.gov/pests-diseases/alb.

Register by Aug. 1 for BQA at Empire Farm Days