Home / Iowa / Planning the rotation from alfalfa to corn 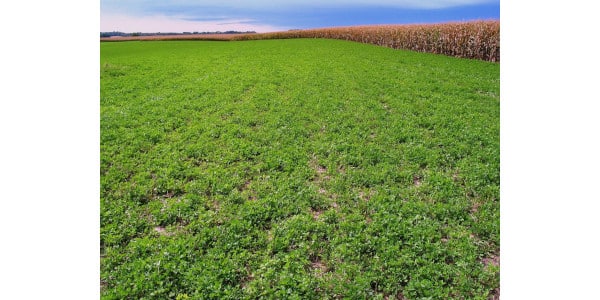 Across 15 years at one location in southwestern Wisconsin and 21 and 30 years at two locations in northern Iowa, grain yield of first-year corn following alfalfa averaged 8 to 18% greater than that of continuous corn and 0 to 8% greater than that of corn following soybean (Mallarino and Ortiz-Torrez, 2006; Stanger and Lauer, 2008). (Photo: Matt Yost)

MINNEAPOLIS — Alfalfa provides many benefits to the corn crops that follow it, with the most notable being higher yield and reduced need for nitrogen (N) application compared to when it is grown in other rotations.

Alfalfa that has been inadequately terminated is highly competitive with young corn plants for water and nutrients. Therefore, it important for alfalfa to be effectively terminated prior to corn emergence.

Termination of alfalfa in the fall rather than spring can result in earlier release of N to the following corn crop, along with earlier drying and warming of soil in the spring. However, termination of alfalfa in the fall results in less cover to protect against soil erosion during the winter if tillage is used. Moreover, termination in the fall does not provide farmers with the option to assess the stand in the spring and determine whether alfalfa could be productive for another year.

Alfalfa can be terminated using herbicides, tillage, or both. Fall herbicide applications to terminate alfalfa should occur before the first killing freeze. A highly effective herbicide option for fall termination of alfalfa is 2,4-D alone or tank-mixed with dicamba. If grasses are present with alfalfa, a good option is to tank-mix glyphosate with 2,4-D. High rates of glyphosate alone often result in only partial kill of alfalfa (60 to 90% kill with fall applications, or 40 to 80% kill with spring applications).

Tillage implements such as a chisel plow with overlapping sweeps or a moldboard plow, which completely cut off all alfalfa roots, are effective at terminating alfalfa, but may not be suitable in some fields due to soil erosion. Tillage implements that do not completely cut off all alfalfa roots will be unable to provide complete alfalfa termination unless herbicide is applied before tillage.

Additional details are available at Managing the Rotation from Alfalfa to Corn.

Got weeds in your beans? You're not alone