Home » Planes could fly thousands of miles on biofuel 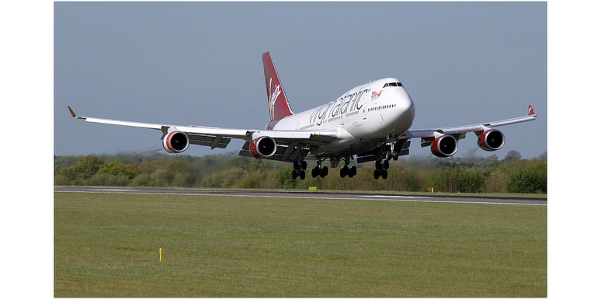 A recent analysis from researchers at the University of Illinois estimate that a Boeing 747 could fly for 10 hours on bio-jet fuel produced on 54 acres of specially engineered sugarcane. (Riik@mctr via Flickr)

URBANA, Ill. — A Boeing 747 burns one gallon of jet fuel each second. A recent analysis from researchers at the University of Illinois estimate that this aircraft could fly for 10 hours on bio-jet fuel produced on 54 acres of specially engineered sugarcane.

Plants Engineered to Replace Oil in Sugarcane and Sweet Sorghum (PETROSS), funded by the Advanced Research Projects Agency – Energy (ARPA-E), has developed sugarcane that produces oil, called lipidcane, that can be converted into biodiesel or jet fuel in place of sugar that is currently used for ethanol production. With 20 percent oil – the theoretical limit – all the sugar in the plant would be replaced by oil.

“Oil-to-Jet is one of the direct and efficient routes to convert bio-based feedstocks to jet fuel,” said Vijay Singh, Director of the Integrated Bioprocessing Research Laboratory and Professor in the Department of Agricultural and Biological Engineering at U of I. “Reducing the feedstock cost is critical to improving process economics of producing bio-jet fuel. Lipidcane allows us to reduce feedstock cost.”

“PETROSS sugarcane is also being engineered to be more cold tolerant, potentially enabling it to be grown on an estimated 23 million acres of marginal land in the Southeastern U.S.,” said PETROSS Director Stephen Long, Gutgsell Endowed Professor of Plant Biology and Crop Sciences at the Carl R. Woese Institute for Genomic Biology at U of I. “If all of this acreage was used to produce renewable jet fuel from lipid-cane, it could replace about 65 percent of national jet fuel consumption.”

“We estimate that this biofuel would cost the airline industry $5.31 per gallon, which is less than most of the reported prices of renewable jet fuel produced from other oil crops or algae,” said Deepak Kumar, postdoctoral researcher in the Department of Agricultural and Biological Engineering at U of I and lead analyst on the study.

This crop also produces profitable co-products: A hydrocarbon fuel is produced along with bio-jet fuel or biodiesel that can be used to produce various bioproducts. The remaining sugar (for plants with less than 20 percent oil) could be sold or used to produce ethanol. In addition, biorefineries could use lipidcane bagasse to produce steam and electricity to become self-sustainable for their energy needs and provide surplus electricity, providing environmental benefits by displacing electricity produced with fossil fuels.

Submit your abstract for FIAAP Asia